Ayurveda is a Sanskrit word which means 'the science of life.' It deals elaborately with measures for healthy living through the entire span of one's life. Ayurveda is considered as 'Upaveda' to the Atharva Veda, which is the first Hindu text on medicine and the fourth book of the Vedas. Ayurveda's origins are attributed to the Indo-European Nasatya or Aswins, twin physicians of the gods of the ancient Indo-European pantheon.

A classic Ayurvedic text parallel to the time frame of the Atharva Veda is the Charaka Samhita. It was written in the Indus Valley around 1000 B.C.E. in Sanskrit language. It is a treatise on general medicine. Individual forms of spirituality and religion play a vital role in the perception and definition of Ayurveda for patients and therapists. In our population adherers of Ayurveda tend to have a particular affinity for Buddhism, Hinduism, and South Asian culture. Ayurveda is referred as sister science regarding 'self-healing and realizations. Originated in ancient India, from a Vedic background and based on the philosophy; it aims at taking us back to harmony with our true Self (Atman). Hence Ayurveda is defined as the means of harmonizing the body, prana, mind, and soul. Ayurveda is the therapeutic aspect of Yoga. Ayurveda's lasting influence outside the Indo-European sphere began after the rise and spread of Buddhism in the 6th century B.C.E. Buddhist monks introduced Ayurveda to China, Tibet, Korea, Mongolia and Sri Lanka. 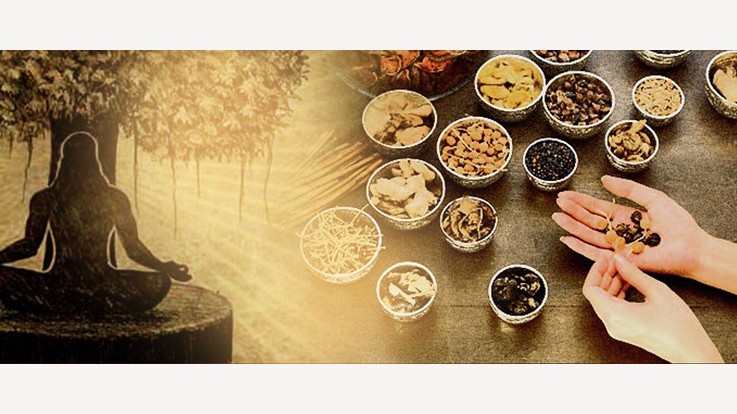 Hinduism is also known as Hindu Dharma or Sanatana Dharma which was originated in India with its roots in the Indus Valley Civilization and Vedic civilization. Hinduism has no known founder. It is a complex blend of diverse traditions and beliefs. Divided as revealed (Shruti) and remembered (Smriti) and developed over millennia, Hinduism provides a vast body of scriptures that expound on a broad of range of theology, philosophy, and legends. Together they offer guidance and spiritual insights regarding dharma. Among the several texts, revered by the Hindus, the Vedas and the Upanishads are the foremost in authority, importance, and antiquity. The Tantras, the sectarian Agamas, the Puranas and the epic Mahabharata, as well as Ramayana, are also included as scriptures. The holy book of Bhagavad Gita, a treatise excerpted from the epic Mahabharata, is referred to as the fifth Veda.

Connection between Hinduism and Ayurveda

Hinduism and Ayurveda are the integral parts of each other so much so that there can be no Ayurveda without Hinduism and no Hinduism without Ayurveda. There is a state of pure existence or awareness behind creation that transcends time and space, has no beginning, no end, and no qualities. It results in an imbalance that causes the manifestation of primordial physical energy which is considered as the creative force of action. Energy and matter being closely related, when energy assumes form, we look at it as matter rather than as energy. The most subtle energies are modified until, eventually, all mental and physical energies unite in dance (also called the Tandava dance of Lord Shiva). These concepts of energy, matter, and awareness are fundamental to the ancient philosophies of Hinduism and Ayurveda.