Muktidham is a marble temple complex which houses various Hindu deities and sages. It is a popular tourist attraction situated in the Nashik Road suburb of the city of Nashik in Maharashtra. Muktidham is operated privately through a trust and was built through a generous donation by late Mr. Jayrambhai Bytco, a local industrialist. The temple complex was founded in the year 1971. Muktidham has replicas of 12 Jyotirlingas, which have been built according to the dimension of actual Jyotirlingas and have been sanctified by sending them to their respective pilgrimage centers. The temple complex also houses a shrine dedicated to Lord Krishna. The walls of this shrine have paintings depicting scenes from the life of Lord Krishna and Mahabharata. 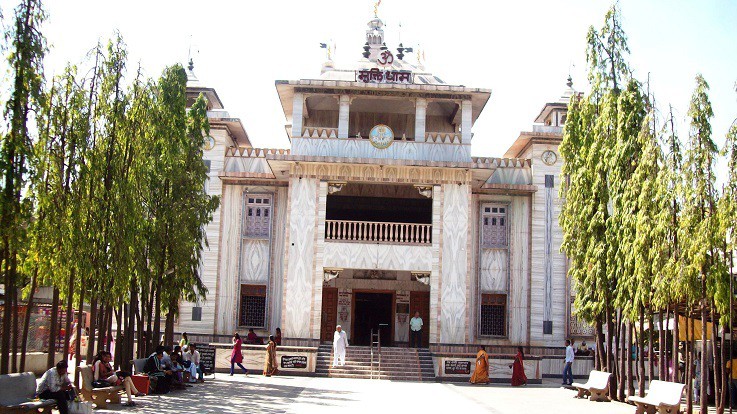 The entire Muktidham complex is made with Makrana marble which was brought from Rajasthan. Muktidham was constructed by Rajasthani sculptors. Apart from the temple of Lord Krishna and the replicas of all the twelve Jyotirlingas, Muktidham complex also houses idols of Hindu deities and sages such as Lord Vishnu, Goddess Laxmi Rama, Laxman, Goddess Sita, Lord Hanuman, Durga Devi and Lord Ganesha. Muktidham is a most popular tourist attraction of Nasik town. Thousands of Hindu devotees visit Muktidham temple during Kumbh Mela. Muktidham complex also houses a Dharamshala, which can accommodate at least 200 pilgrims. The entire edifice has an unusual architecture. According to the Hindus, a visit to this temple is equivalent to the visit to four holy centers or ‘dhams’. The fascinating feature of this temple is that temple walls contain inscriptions of 18 chapters of holy Bhagavad Gita.

All the major Hindu festivals including Holi, Basant Panchami, Dussehra, Janmashtami, Maha Shivratri and Diwali are celebrated with great devotion in Muktidham.

By Air: The closest airport is located at Nasik.

By Train: Nasik Road is the closest railway head.