Kumbh Mela is a mass Hindu pilgrimage of faith in which Hindus gather to bathe in a sacred or holy river. Traditionally, four fairs are recognized as the Kumbh Melas: the Haridwar Kumbh Mela, the Allahabad Kumbh Mela, the Nashik-Trimbakeshwar Simhastha, and Ujjain Simhastha. It is held periodically at one of the following places by rotation: Haridwar, Allahabad, Nashik (Nashik and Trimbakeshwar), and Ujjain. The main site of the festival is located on the banks of a river: the Ganges at Haridwar; the Triveni Sangam of the Ganges, river Yamuna and the invisible Sarasvati at Allahabad; river Godavari at Nashik; and river Shipra at Ujjain. As per the belief, bathing in these rivers cleanses a person of all sins. 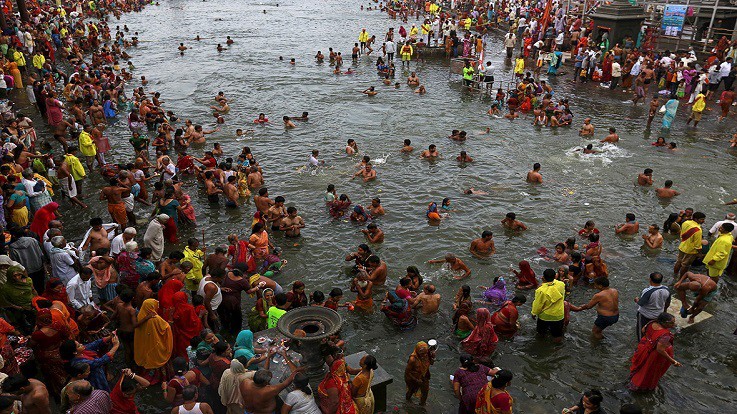 A view of the famous Mela

Kumbh Mela is organized once in twelve years on the days when the waters of the sacred rivers are believed to turn into nectar. The exact date is decided as per Vikram Samvat calendar and the principals of traditional astrology and as per the combination of zodiac positions of the Sun, the Jupiter, and the Moon. At Nashik and Ujjain, Kumbha Mela is organized when a planet is in Leo (Simha in Hindu astrology). Hence, it is also known as Simhastha Kumbha. At Haridwar and Allahabad, an Ardha Kumbh Mela (("Half" Kumbha Mela) is organized every sixth year whereas a Maha Kumbh Mela occurs after 144 years.

It is believed that those who bathe in the sacred rivers during the Kumbh are blessed by the divine as all their sins are washed away, and they attain salvation. Several holy men from different Hindu sects such as the Nagas, Kalpwasis, and Urdhawavahurs come to the Mela to perform sacred rituals. The festival is believed to be over 2000 years old. The written evidence of Kumbha Mela can be found in the accounts of the Chinese traveller Xuanzang, who visited India in 629-645 BCE. "Kumbh Mela" literally means "Kumbha fair.” The festival is considered as the "world's largest congregation of religious pilgrims." 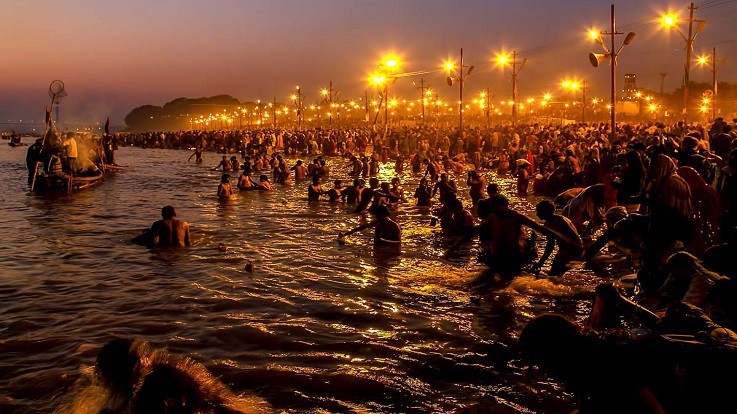 A view of the Mela, People taking holy dip

According to the Hindu legend, the origin of the festival can be found in the ancient legend of Samudra Manthan. A battle broke out between the Devas and Asuras for Amrit, the drink of immortality. During churning of the ocean, nectar was produced which was placed in a Kumbha (pot). A divine figure flew away with the pot to prevent the demons from seizing the nectar. In another version of the legend, the divine figure is Dhanavantari, the divine physician who stopped at the four sites where the Kumbh Mela is celebrated.

Kumbh Mela is held every three years, and switches between four different locations – Haridwar (river Ganga), Prayag (Triveni Sangam), Ujjain (river Kshipra), and Nasik (river Godavari). The Mela returns to each location after 12 years. The ritual bath for cleansing one's soul is the most important ritual in Kumbh Mela. Hindus believe that taking a dip in the sacred river on the most sacred day of the new moon will wash away their sins and hence ending the cycle of birth and death. Right from the dawn, the pilgrims start assembling on the banks of the river. The other rituals include singing devotional songs, religious gathering, and mass-feeding. The order of entering into the sacred river is pre-decided. The Naga Sadhus enter first, followed by Urdhwavahurs, Parivajakas and Shirshasins.