Many year ago, To save earth from the captivity of Hiranyaksha, Lord Vishnu had arrived in the avatar (incarnation) Varaha (boar) form and killed him. Hiranyakashipu, Elder brother of Hiranyaksha wanted to take revenge on the devotees and in particular on Lord Vishnu. He wanted to become the master of all the three worlds -Heaven, Earth & Pathala. 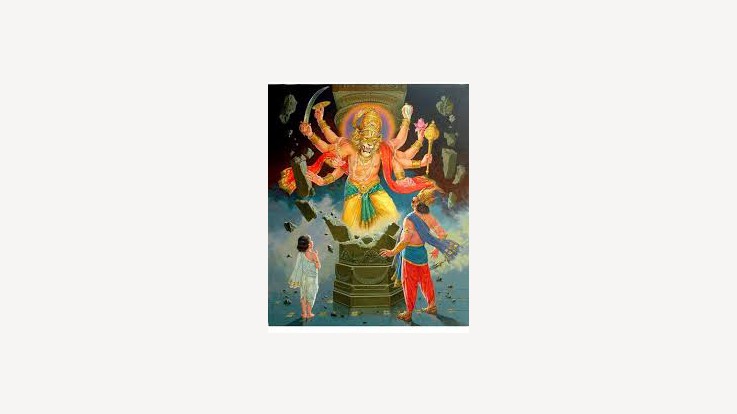 He went to the Himalayas and began to perform severe penance for many years. Lord Brahma was pleased by his penance and asked him for a boon. He asked for a boon that would make him as good as immortal. He asked that let death do not come to me either by man or beast, nor devil, nor god shall cause my death by day or by night with steel or stone or wood, indoors or outdoors, or earth or in sky. Grant me undisputed lordship over the world. With Boon, he became very domineering and egoistic. In this state of mind he ordered that only he should be worshipped as God in his kingdom. Now considered himself invincible and started a reign of terror, hurting and killing everyone on earth and conquest of the three lokas.

Whilst Hiranyakashipu had been performing the penance to be granted this boon, his home had been attacked by Indra and the other devas seizing the opportunity in his absence. Lord Indra had even abducted his wife, Queen Kayadhu who was expecting a child. At this point the divine sage, Narada intervened in order to protect Hiranyakashipu's wife, Kayadhu and the unborn baby who was a supreme devotee of Lord Vishnu. Under the guidance of Narada, her unborn child (Hiranyakashipu's son) Prahlada, became affected by the transcendental instructions of the sage even at such a young stage of development.

Hiranyakashipu eventually becomes so angry and upset at his son's devotion to Vishnu (who he sees as his mortal enemy) that he decides he must kill him. The demons tried to use their illusionary powers on Prahlad but none of their powers could stand before him. He tried to influence Prahlad against Lord Vishnu but failed and Prahlad was still as devoted as ever to Lord Vishnu. He ordered him to be trampled underfoot by an elephant. The enraged elephant was unable to crush the body. They thrown him over a precipice, but, as Vishnu resided in the heart of Prahlada, he came down upon the earth as gently as a flower drops upon the grass. They tried Poison, burn, starvation, throwing into a well, enchantments, and other measures on the child one after another, but to no purpose. They failed in all their attempts because Lord Vishnu was protecting his devotee.

As a last hope, the king called his demoness sister, Holika for help. Holika has a distinctive cloak that when worn prevented her from being harmed by fire. By preparing a bonfire Hiranyakashipu asked Holika to sit with his son Prahlad in her lap in the hope that he will become a victim to fire. Without any fear of death Prahlada started chanting the mantras of Lord Vishnu. As the fire grew, a strong breeze started swaying the cloak. The cloak flew from Holika and covered Prahlad. It was then that she was charred to death and Prahlad remained unharmed. Since then, the night is celebrated as Holika Dahan.

Hiranyakashipu eventually becomes so angry and upset went to meet Prahlada as he refuses to acknowledge his father as the supreme lord of the universe and claims that Vishnu is all-pervading and omnipresent. To which Hiranyakashipu points to a nearby pillar and asks if 'his Vishnu' is in it. The king got up from his throne in fury and hit the pillar with his mace. And to his surprise! The pillar cracked with a thundering sound and Vishnu appeared there in the form of Narasimha. One half of his body was of a lion and the other half of a man. He had matted hair on his head, large moustaches on the face and terrible teeth in the mouth. His paws had terrible nails on them. 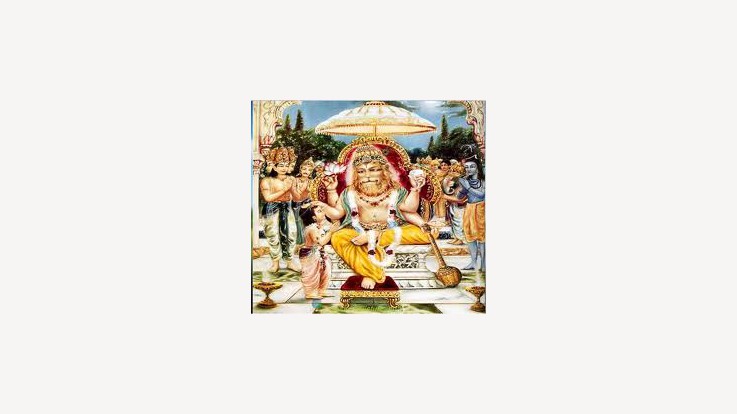 Narsimha roared angrily. The demon king Hiranyakashipu tried his best to escape from Narsimha. But at last, Narsimha caught hold of him and dragged him towards the threshold. There, he put Hiranyakashipu on thighs and tore his belly with his terrifying nails.Even after killing Hiranyakashipu none of the gods(Lord Shiva, Brahma) were able to calm Narasimha's fury, So all the gods and goddesses called His consort, the goddess Lakshmi, but she was also unable to do so. Then, at the request of Brahma, Prahlada was presented to Narasimha. He was pacified when Prahlad touched his feet. Lord Narsimha then asked Prahlad to seek some boon. Prahlad said: “You are my true Lord. If you wish to grant me a boon, kindly bless me that no desire may arise in my mind for anything.” Pralada also prayed for his father.

Lord Narasimha then made Prahlad the King and instructed him to follow good conduct and do his duties. Saying those words  Lord Narsimha disappeared.