The Lakshmi- Narayan temple located in Delhi is also known as Birla Mandir. This temple is dedicated to Goddess Lakshmi and Lord Vishnu. The temple was built by B. R. Birla and Jugal Kishore Birla in 1938. The Birla temple is located in the west of Connaught Place. Built in an area of 7.5 acres, filled with number of shrines and garden this place attracts number of national and international tourists. 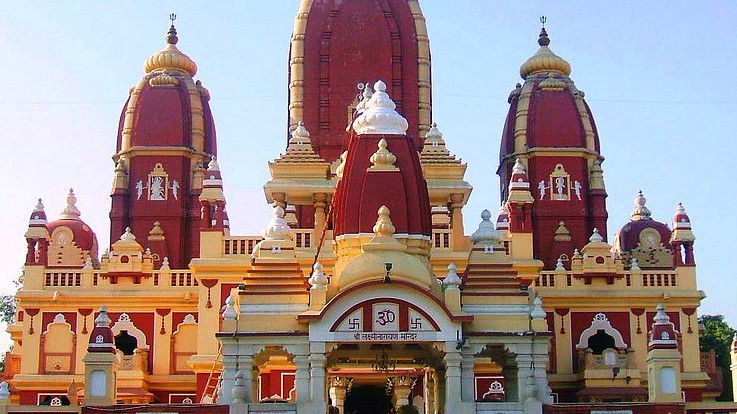 This temple was built by B. R. Birla and Jugal Kishore Birla in 1938 and inaugurated by Mahatma Gandhi. At that time of inauguration of the temple, Gandhiji kept a condition for inaugurating the temple. The condition was that that the Delhi LaxmiNarayan Temple should allow people from all castes, especially untouchables. The foundation stone of temple was laid by Maharaj Uday bhanu Singh.

Lakshmi Narayan Mandir has been built magnificently with a touch of modernity. The Temple is interior of the temple is full of beautiful carvings depicting the scenes from Indian mythology. The highest Shikhara of the temple above the sanctum is about 160 feet high. The main temple houses statues of Lord Narayan and Hindu Goddess Lakshmi. There are other small shrines dedicated to Lord Shiva, Lord Ganesha and Hanuman. There is also a temple dedicated to Buddha in this complex with fresco paintings describing his life and work. One can see the entire complex decorated with beautiful paintings and art. The temple is beautifully decorated with artificial landscape and waterfalls. Birla Mandir of Delhi also enshrines the holy Vedas.All the statues in the Birla mandir are made up of marble and were brought from Jaipur. There stands a mini temple made up of marble and is located in the complex.

Significance of the temple

Birla Mandir attracts a number of devotees to its doorstep.It is said that lord Vishnu and goddess Lakshmi shower their blessing on all the devotees who visit this temple carrying purity in their heart.Birla Mandir is also famous for the festival of Janmashtami (birth of the Hindu deity Krishna). The festival is celebrated with so much zeal and enthusiasm.

The best part of the temple is that one can visit the Laxminarayan Mandir any day of the week as it remains open on all days of a week and visiting time is 7 am-12 am and 2 pm-9pm. Winters are good to for visiting the temple.

How to Reach the Temple

Since the temple is located in the heart of the city, i.e. Mandir Marg, Connaught place, it is very easy to reach the temple. It is connected by various means like metro, taxis and auto rickshaw.