Mahakali Temple is situated at Adiware in Rajapur Taluka of Maharashtra. It is one of the most popular and revered temple in Adiware wadapeth. The temple is a small yet well-maintained, which is a home for three goddesses viz. Goddess Mahalakshmi, Goddess Mahakali and Goddess Mahasaraswati. A well is seen in the temple complex which has a different arrangement to draw the water out of it. A bark of a tree has tied on a horizontal bamboo bar which acts as a pulley. At the other end of this, another vertical bamboo with a vessel is seen which is long enough to reach the water level.

The main entrance or Mahadwara of the temple faces towards west. Several deep-malas can be seen on either side. Garuda mandap has square pillars and foliated arches of wood which is a typical characteristic of Maratha temples. An image of Garuda faces the sanctum. Another stone mandap, on a raised platform, has an idol of Lord Ganesh, which faces the sanctum. The main sanctum has three shrines facing west. The center houses an idol of Goddess Mahalakshmi which is flanked by the idols of Goddess Mahakali and Mahasaraswati. The black stone idol of Mahalakshmi is 3 ft tall The Shri Yantra is carved on one of the walls of the temple. The sanctum is designed in such a manner that once in a year, the setting rays of the sun falls on the face of Goddess Mahalakshmi for three days. Above the main sanctum is a shrine which houses Shiva ling and a Nandi. The devakoshtas houses the images of Venkatesha, Katyayani, and Gowri Shankar - facing the north, east and the south, respectively. Several subsidiary shrines can be seen in the courtyard including Navagrahas, Surya, Mahishasuramardini, Vitthal-Rakhmai, Shiva, Vishnu, and Tulja Bhavani. Some of these idols date back to the 11th century, while some are recent. Also located in the courtyard is the temple tank Manikarnika Kund. 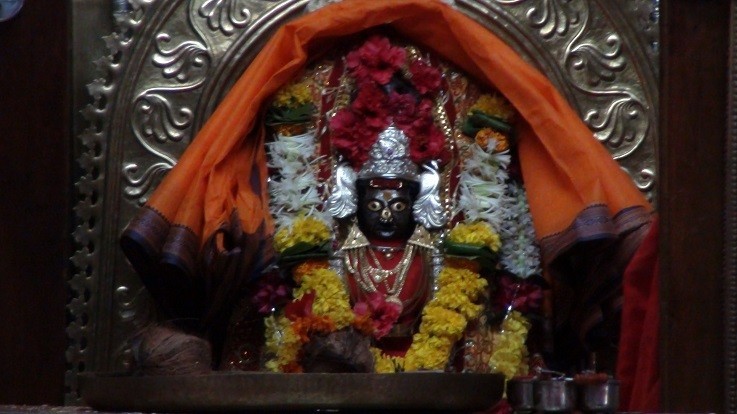 The temple complex exhibits mortarless construction which represents Deccan temples. The temple has a rich display of sculpture of figurines in dancing poses, musicians, gods and goddesses. The three sanctums have simple yet elegant shikharas of brick and mortar which dates back to the 19th century. The several parts of the temple are of the second half of the second millennium CE, but the references place the deity in the 7th century CE and the temple in the 10th century CE. For a short period, the image of the Goddess was housed elsewhere. Worship was restored in this temple in the year 1715 after the Marathas came to power. The temple mandap dates back to the 18th century

As per Karavira Mahatmya, Lord Vishnu resides in the form of Mahalakshmi at Kolhapur. Legend has it that Kolhasura, a demon tormented the Gods and human beings. He was destroyed by Mahalakshmi at Karavira. The place of his death became a thirtha and goddess Mahalakshmi took abode here in a shrine which constitutes the temple today. 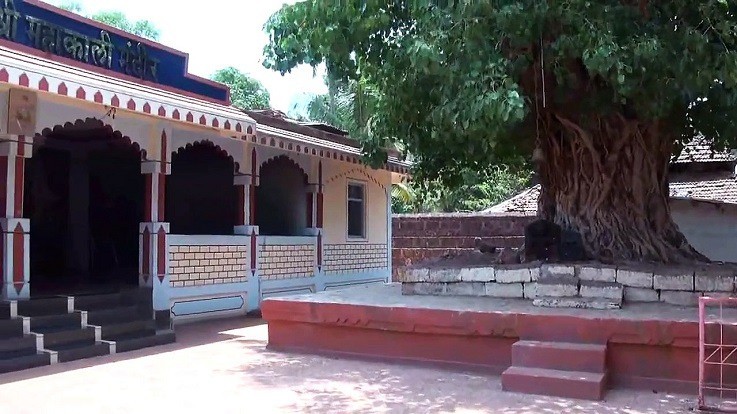 A festival image of the goddess is taken out in procession on every Friday, and on full moon days. Devotees throng the temple to seek the blessings of goddesses especially during Chitra Navratri, Ashvin Navratri, Dussehra, and Diwali.

By Road: Mahalakshmi temple is located at 28 km from Rajapur, 39 km from Ratnagiri. Buses, Auto-rickshaws, and other private vehicles are easily available to reach the temple.

By Air: The nearby airport is located at Ratnagiri.

By Train: Rajapur is the closest railway head.