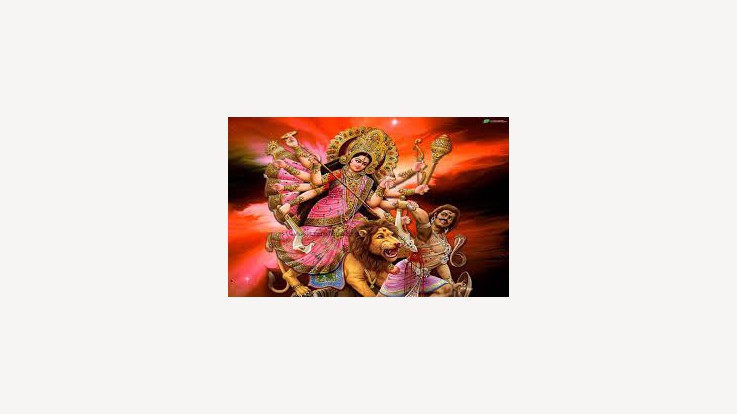 According to Hindu Puranas, Mahishasura's father Rambha was king of the Asuras (Demon), and he once fell in love with a Water Buffalo (Princess Shyamala, cursed to be a buffalo). Rambha due to his magical powers took the form of a male buffalo and by their union Mahisha was born with the head of a buffalo and human body.  Mahishasura was the king who ruled the kingdom of Mahisha or Mahishaka. Mahishasura has the magical power to take the form of buffalo and human according to his wish. In Sanskrit language, Mahisha means Buffalo.

He found great happiness in hurting people. Once, he decided to pray to lord Brahma, who he thought would give him a boon, which would make him invincible.

Mahisha performed severe penances, praying and fasting for months on one foot. He trembled all three worlds under the strength of his penances and a pleased lord Brahma came to give him a boon. He asked for a boon that would make him as good as immortal. He asked that no man, animal, dev should be able to kill. He was sure that no woman could ever fight against him.

Now considered himself invincible and started a reign of terror, hurting and killing everyone on earth and conquest of the three lokas. Even Indra's thunderbolt could not withstand the asura attack. Mahisha drove out the Gods and took over Indra's throne. He has started harassing all people who continued praying to Vishnu or Shiva. The Gods and people were depressed and decided to ask help from lord Shiva, Vishnu and Brahma.

Lord Shiva, Vishnu, and Brahma concentrated hard and used their radiant energies, which were joined by the energies from Indra and the other Gods. The display of anger from the three sent out a light, which illuminated the three worlds and combined to take the beautiful form of the Goddess Durga with ten hands. As all knew, Destroying form of a Devi, with the boons and powers of the three would be able to slay the demon and restore balance and prosperity to the worlds.

According to Puranas, various God gave their arms and power to her.

She mounted a fiery lion and roared. It was a roar that shook mountains and created huge waves in the seas. When Mahishasura saw Durga on the battlefield, he terrified as he has underestimated power of a devi.

Then began a fierce battle between the two and their armies of Devas and Asuras, the fighting continued for nine days and nights with much gore and destruction. Finally on the tenth day, he was trying to avoid defeat by transforming to other form. While he is in mid-transformation from Buffalo back to Human form, Devi finally slays him. Durga pierced his chest with her trishul and swiftly beheaded Mahishasura with her sword, Thus Durga got the name Mahishasuramardini, the slayer of Mahishasura.

In Mysore, there is a Lord Durga(Mahishasura mardini or Chamundi) temple with a large statue of Mahishasura on top of Chamundi hills.