Soon, his parents desired to go on a pilgrimage. Hearing this, the son was very pleased. He wanted to fulfil his parent’s desires so he created a balance like device where he could carry his parents on his shoulders and take them on the pilgrimage. Soon they set off their journey. During their travel, Shravan Kumar offered his parents some fruits from the forest.  They ate the fruits happily but never had any corn or cereal. Since they were on a pilgrimage, they avoided food offered by anyone else. 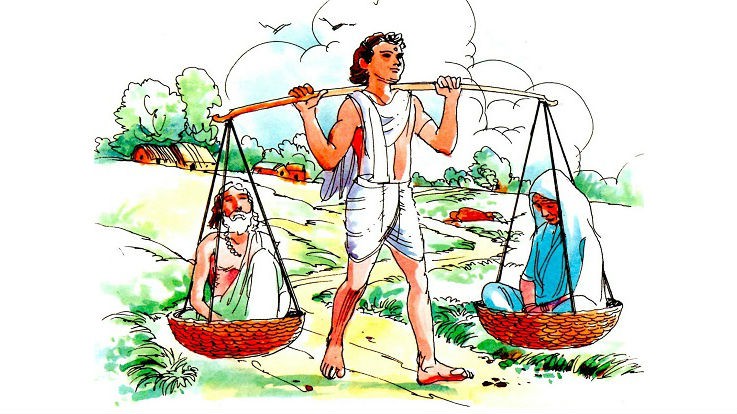 They reached a forest near Ayodhya. Soon they felt very thirsty and asked Shravan to get some water in order to quench their thirst. Shravan left his parents in the forest and went to river Sarayu to bring water for them.

The king of Ayodhya was King Dashrath and he was very good at hunting.  He stepped into the forest with an intention to hunt.  He had an innate quality of hunting as he could throw his arrow from miles if he could hear a sound.  Shravan dipped the vessel to collect water and that produced a sound. Hearing the sound, Dashrath mistook it as the sound of a deer drinking water.  He aimed his arrow from where the sound was coming and threw it. The arrow breezed through the air and pierced straight into the chest of Shravan Kumar.  He cried out of excruciating pain and eventually fell on the ground.

The moaning sound did not escape the ears of Dashrath. He reached the place immediately and saw the innocent boy crying out of unbearable pain. Dashrath noticed a vessel lying beside him and the boy was all covered with mud and blood. After seeing the sight, Dashrath became very upset and cursed himself.

Soon Shravan noticed the king. He told the king in a trembling voice not to worry for him. He told that he came to river to get some water for his thirsty parents. He requested the king to pull out the arrow that had pierced him and take some water to his parents. He also instructed him to inform his parents about his death.  The king pulled the arrow out and took water for Shravan’s parents.  He offered the water to the old parents however the parents denied to have it and asked the carrier to reveal his identity.  The carrier gave the news of their son’s death and hearing it the parents were in utter grief and dismay.  He requested the king to take them to their son.  Slowly the king took them to the place where their son had died. After reaching the spot, Shravan Kumar conveyed a message to their parents. He uttered that he has got a place in heaven and he would wait for both his parents to arrive there so that he can provide the services again to them.

Soon the parents took a dip in the sacred river and died beside their son. However before dying they had cursed King Dashrath for killing their son. They said that as they could not tolerate their son’s death and hence they died, similarly King Dashrath would also face the same consequences one day. He would also die due to his son’s loss. The curse was found to be true because king Dashrath could not bear the pain and died at the time when Lord Rama went on exile for fourteen long years.