Thousands of years ago, there lived a King named Dashrath of Ikshvaku dynasty ruling the kingdom in the beautiful city of Ayodhya, on the banks of river Sarayu. He was a generous and intelligent king loved by his people. He had three wives Kaushalya, Kaikeyi and Sumitra. But he had one sorrow; he had no children which made him always worried and sad.

One day the king called his priest, Vashishtha and conveyed his sorrow. Vashishth said that he will have four sons soon and advised him to perform Ashvamedha Yagna under the guidance of Rishyashringa, son-in-law of King Romapada. Dashrath and his ministers started all the arrangements for the Vedic ritual and the city of Ayodhya was decorated grandly.

King Dashrath with his four son’s

The evil demon Ravana with remarkable powers troubled many gods and holy saints from performing holy rituals. He had ten heads and twenty arms. Ravana was blessed with a boon from Lord Shiva that protected him from gods. Vishnu then decided to defeat and kill Ravana by taking a human form. And so, Vishnu sent a message to King Dashrath who was later blessed with four sons, the elder son being Rama, an incarnation of Lord Vishnu.

The eminent Rishyashringa arrived to perform the Vedic ritual. Many prominent scholars were invited for the ceremony. Under his guidance, Dashrath followed all the rituals earnestly to perform the sacrifice of horse. At the end of the sacred ritual, arose a divine being from the sacrificial fire, holding a vessel of divine sweet in his hands. He handed over this vessel to Dashrath and instructed him to distribute among his wives. As per, Dashrath gave half of it to Kausalya, one fourth to Sumitra and one eighth to Kaikeyi. However, there still was some sweet left so he gave it again to Sumitra. Soon all his wives conceived.

After twelve months of Ashvamedha yagna, in the month of Chaitra, a day which was neither hot nor cool, winds blew softly and the forests were full of beautiful blossoms. The rivers flowed swiftly and sang with joy. The sun, moon and stars gracefully waited while Queen Kausalya gave birth to a son, later named as Rama, with all divine attributes. There were no words for her as she gazed his magnificent beauty. King Dashrath was very happy and overjoyed with the birth of his elder son.

The news spread all over the city and everyone began to celebrate the arrival of their future king, Rama. The King distributed gifts to his citizens happily.

All four brothers grew up with mutual affection.

The birth day of Rama is now celebrated as Rama Navami, which falls on ninth day in the month of Chaitra.

The day when Ravana was killed with magnificent powers of Rama is celebrated as Vijayadashami, 10th day of Dussehra. 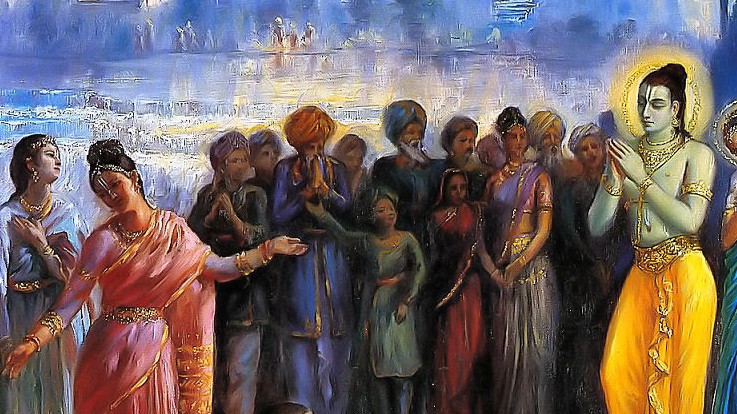 Citizens of Ayodhya, had decorated the city with lamps to welcome the return of their King Rama with his wife Sita and brother Lakshmana, after destroying evil demon Ravana. This day is now celebrated as Diwali in India, lightning of lamps and bursting of crackers festival.