This story tells us about the generous and kind King Rantideva of ancient days and his spiritual way which procured him mukti or moksha. He was a great devotee of Lord Vishnu and saw the Lord in everyone and everywhere. So he worshipped Lord Vishnu by helping and caring all the people of his kingdom with great love. He always used to be ready to provide whatever was needed by his people and never showed any difference in his generosity between the poor and the rich. Rantideva distributed his wealth that he had in plenty to the poor and the needy as he was never greedy for wealth but showed pleasure to serve his people and thought it was a way to spread the blessings of Lord Vishnu.

In this way all went well and people lived happily and with prosperity in his country. But suddenly there was disaster. Unseasoned rains and winds destroyed many crops, caused death of animals in his country that lead to scarcity of food. The common man ran to seek help from their kindhearted king. Without a second thought, Rantideva distributed his wealth and treasure to his people and prayed  to Lord Vishnu to bless him with strength to protect them. The people were happy with the king’s kindness. 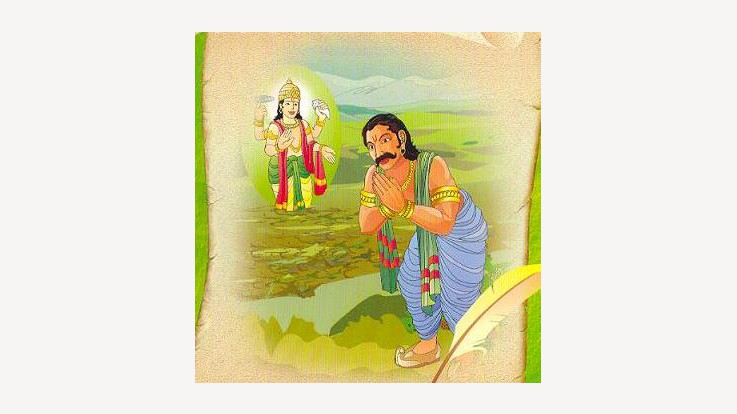 However, the condition became more worse as days passed due to continuous failure of the crops resulting in famine throughout the region. People starved without food and water and were homeless. This was a horrible disaster faced by the king who himself did not have any food. Whenever he and his family had little food, they would first distribute them to the people who came with hungry.

As time passed, the drought got more severe and the king was left with nothing for his starving poor people. He felt very miserable but had a strong faith on Lord Vishnu and prayed him with devotion. Though there never came a good time for his country and the famine continued.

Rantideva starved for days long but still meditated and prayed to Lord Vishnu. He became very weak with lack of food and was hardly able to move. On one fine day, unexpectedly the king and his family were offered food by a stranger. As they saw the food he and his family were happy and glad and as they were about to have the food, a poor hungry Brahmin came seeking for food. The king received him respectfully and offered a part of his food. The Brahmin ate happily and was pleased by the king. As soon as he left, they were about to eat again but then there came a hungry beggar to their doorstep. Rantideva offered him too with some part of the food. The beggar left satisfied and soon there came a man with his dogs to seek food and informed about starving for many days now. The king offered them with the remaining food. He and his dogs finished all the solid food and Rantideva was left only with water to drink.

When the king was about to drink the water, just then came a man, Chandala, whose throat pinched with thirst and he requested the king to offer him some water. The king without any hesitation gave him the water and prayed to the Lord to give him strength to feel the pain of others rather than wealth and power.

As the man drank the water, his eye sparkled brightly and was full of energy that made the king fulfilled and refreshed. Suddenly there appeared Lord Vishnu and all his attendants. Vishnu conveyed to the king that he was very pleased with his devotion and love to his people. He told that all his sufferings will end and he will be rendered with all wealth and riches only if he continued to worship him. Instead, Rantideva told that he had no desire to worldly pleasures but rather he was completely absorbed in Vishnu.

Lord Vishnu blessed his devotee Rantideva who attained moksha and became one of the great yogis involved in meditation. 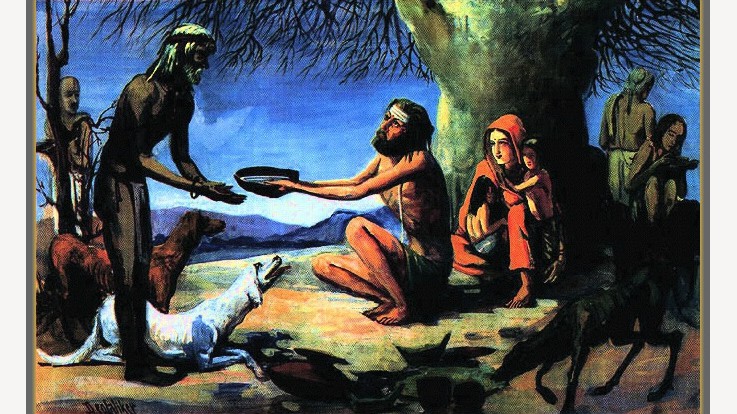