The marriage of Tulsi and Saligram is performed every year on the eleventh day of Shukla Paksha in the month of Kartik where the rituals of Hindu marriages are performed. Tulsi is dressed in a red saree. Her branches are adorned with red–green bangles, kumkum, and red bindi. The mangalsutra is made of dried turmeric root. Women worship the Tulsi with flowers and milk assuming the presence of Lord Krishna in it. Tulsi Vivah is a very auspicious festival for Hindus. It is considered to be the end of the harvesting season and beginning of the marriage season in India. Along with Tulsi, Amla, sugarcane, and tamarind are also planted. 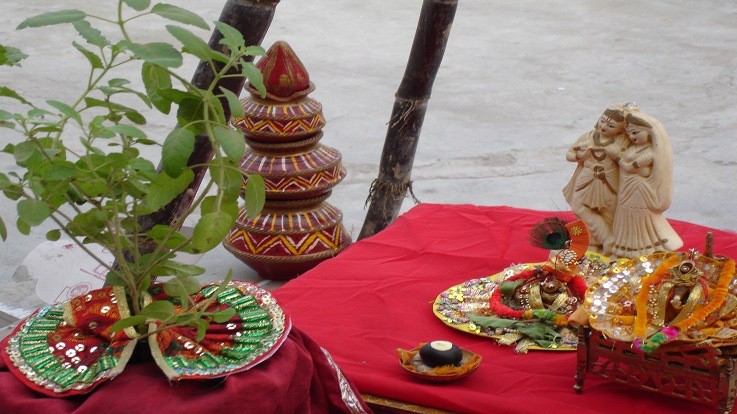 The belief is that those who perform Tulsi Vivah ceremony giving away Tulsi considering them to be one’s daughters get the credit of Kanyadan which is an auspicious act in Hindu religion. Tulsi plant can help to vanish all the Architectural defects in a house. For Hindus, Tulsi is the most sacred plant. Puja offerings are considered incomplete without the Tulsi leaf. It also symbolizes Goddess Lakshmi, the consort of Lord Vishnu. Women seek blessings for happy married life. The Tulsi leaf has great medicinal value as it cures various ailments, including the common cold. Performing one or four Parikramas of the plant removes the evil effects of the sins.

The story behind the ritual of Tulsi Vivah is ancient. Lord Brahma, had recited this story to Shri Vasishthaji who wrote it in the Padma Puran. Tulsi, which in her previous birth was Vrinda, the daughter of Kaalnemi, king of Mathura. She was the wife of demon Jalandhar. Being born in water, Jalandhar demanded the fourteen treasures which were churned out of the ocean. But the Gods refused. Hence, Jalandhar declared war and became a danger to the gods because of a boon that death can't catch him till his wife Vrinda is chaste.

As a last resort to protect the treasures, Lord Vishnu decided to kill Jalandhar. Lord Vishnu beguiles Vrinda by assuming her husband’s form. But Vrinda realized Lord Vishnu’s deceit. She cursed Lord Vishnu and turned him into a Black stone (Saligram), Lord Vishnu admired her impeachable chastity and piety. He transformed her into the sacred Tulsi plant and promised to marry her annually on the Ekadashi day of Kartik month. 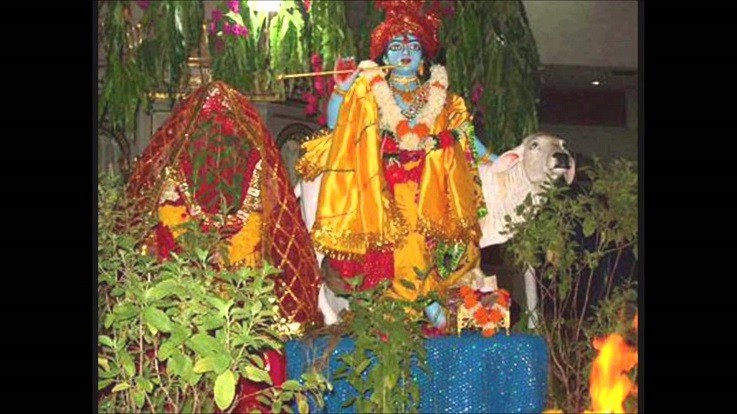 In the morning, all around the courtyard of the house, cow dung and water is sprinkled. If the Tulsi is kept in a pot, then it should be painted white as it attracts the divine frequencies. Draw a Swastik and rangolī around Tulsi plant and perform ritualistic worship.

On this day, Goddess Lakshmi is worshipped as Tulsi, and Lord Vishnu is worshipped as Saligram. The marriage ceremony is conducted in the evening as per the auspicious time. The idol of Lakshmi is placed on an altar and is bathed with water, Panchamrita followed by water containing gold or pearl ornament. The idol is placed on the Kalasha. Sandalwood paste, a garland of cotton beads, saffron paste, perfume, Turmeric, Kumkum, incense stick, Gulal, Marigold flowers, and Bael leaves are offered along with sweets, puffed rice, Batasha, coriander seeds, cumin seeds coconut, fruits, and Tambul. Towards the end of the ritual, Aarti is performed, dedicated to Goddess Lakshmi.