BACKGROUND TO THE STORY OF BHAGEERATH:

Once upon a time, there lived a king called Sagara in the dynasty of Ikswaku. He was a ruler of great vigour and had fought many battles with different surrounding kingdoms. The most of the battles that he had fought, he emerged out as a winner.  He married two women and eventually became a father of many children. The sons of this powerful king were equally powerful like their father. They invaded different corners of the earth and fought with everyone whoever tried to stop them. 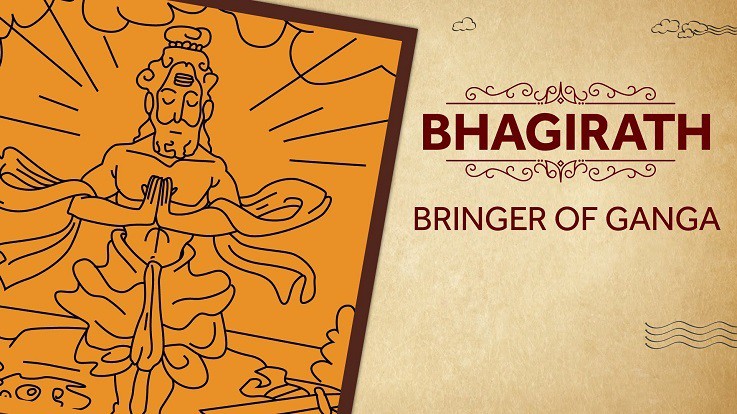 After ruling over his dynasty for a long time, in order to become the king, he decided to perform the Horse Sacrifice (Aswamedha). Bhajeerath's sons led the horse all over the entire earth. However, while the horse was roaming around, they lost the track of horse. They looked for the horse everywhere but could not trace it anywhere. The princes of Sagara returned to the kingdom and reported the same to their father. Sagara instructed his sons that in order to perform the Aswamedya yajna, he would need the animal without which the yajna was not possible. So, he ordered them to go back and find the horse again.

On their father’s instructions, the sons engaged themselves in the task of finding the horse once again. They reached the ocean and found a big hole on the bed of the ocean. The princes dug the hole deep so that it would allow them to enter and look for the horse. On entering, they found the horse near a hermitage. This hermitage belonged to Sage Kapila. When the princes arrived, the sage was found meditating. The sons were very excited to locate it and did not bother about the sage at all and shouted in joy after getting a glimpse of the horse.  The sage was disturbed by their arrival and he got extremely furious. He opened his eyes ablaze and burned the princes into ashes.

Narada informed Sagara about the unfortunate news of his sons. The king was devastated to know about his sons however he was not in a condition to do any justice to his sons and his vow did not allow him to move out until the horse returned to his kingdom. The king had a grandson who was called Amsuman.  Sagara called out to Amsuman and demanded his help. He instructed him to find out the path his fathers and uncles had followed and also asked him to bring back the horse.

Amsuman did not hesitate at all and set off on his journey immediately. Soon, he reached sage Kapila’s hermitage. He found the sage meditating with his eyes closed. Amsuman held his patience and waited for the sage to open his eyes. Sage Kapila appreciated the boy’s patience and perseverance. He wanted the boy to ask for a boon. Amsuman was clever enough and did not let the boon go in vain. He requested the sage to release the horse. The sage released the horse immediately and asked Amsuman to ask for another boon. Amsuman wanted the sage to salvage his dead father and uncles. The sage was kind enough to grant his wish however he did not grant it immediately. He put a condition to the boy. He asked the boy to bring the water of the River Ganga from heaven to the earth. 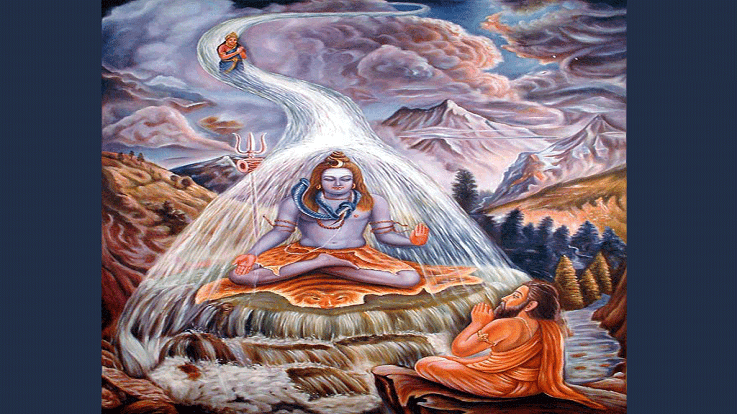 Along with Shiva and Ganga

Amsuman returned to the palace and narrated the entire incident to the king. The king happily conducted the ritual and coronated Amsuman as the king and left his palatial pleasures and started to dwell in the forests.

Amsuman had a son called Dileepa. Dileepa left his house for the Himalayas and meditated there for several years with a hope to please Ganga but could not succeed.

Dileepa’s son was known as Bhageeratha. Bhageeratha was aware of the mission of his father, so he went to the Himalayas at a very young age in order to fulfil the wishes of his father.

In order to please River Ganga, he prayed for several years. Ultimately, he could please the river and it came before Bhageeratha as a goddess. Soon, River Ganga agreed to flow down to earth. However, Ganga was very powerful and it would flow very forcibly if nobody would be there to stop it.  Hence it needed somebody equally forceful who would hold the river falling from the heaven. River Ganga desired Lord Shiva to be approached for the work.

Hearing about Lord Shiva, now Bhageerath started to meditate on Shiva. The lord was pleased with Bhageerath’s prayers and appeared in front of him. He agreed to receive Ganga falling vigorously from heaven in his hair. Next, he prayed to Ganga and request her to flow to the earth.

Soon, Ganga started to flow from the heaven to the hair of Lord Shiva. Ganga’s pride was her force and did not know how would Lord Shiva withstand her force. Shiva could understand Ganga’s thoughts and hence he applied all his strength and withstood it with great vigour.

Bhageerath had to pray and meditate for years to please Lord Shiva. Finally, Lord Shiva was pleased and agreed to the request of Bhageerath.

The water that flew from the head of Shiva came to be known as the mighty Ganga River. In the end, Bhageerath helped his grandparents in their salvation too.