About Nala and Nila:

In Hindu epic Ramayana, Nala, the monkey is credited as the engineer of the Rama Setu, a bridge which was built across the ocean between Rameswaram (India) and Lanka, so that the monkey army of the god Rama can pass over to Lanka. The bridge is also known as Nala Setu. Another monkey Nila was a chieftain in the army of Ram. He was the commander-in-chief of the monkey army under the monkey king Sugriva who lead the army in the battle against the demon king Ravana of Lanka. Nila is described as the son of Agni, the fire-god, and as the "foremost among the monkeys in effulgence, reputation, and prowess." Nila faced the demon Nikumbha. Though injured by the demon, Nila picked up the chariot wheel of Nikumbha and killed him with it. Nila also fought a fierce battle with Prahasta, the demon who shot many arrows at Nila. When Prahasta dashed towards Nila with a mallet, he fought back with rocks and finally hurled a huge boulder at Prahasta, thus slaying him. Nila also fought with Ravana, jumping onto his chariot. Nila and Hanuman together fought with demons Trishira and Mahodara. Nila killed Mahodara with a rock. 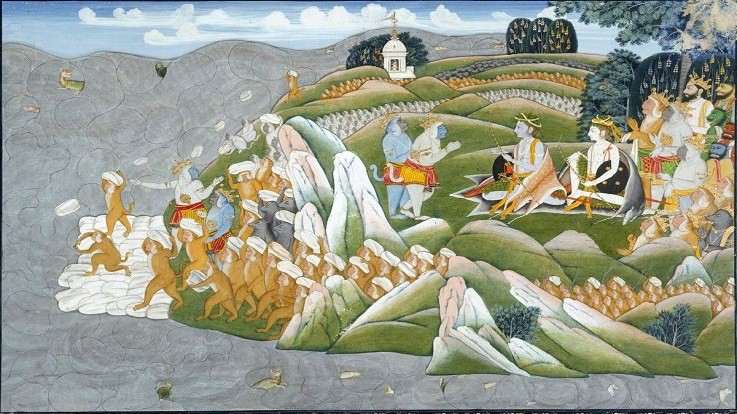 Ravana, the King of Lanka, had Kidnapped Sita, the wife of Lord Ram as revenge for his sister Sooparnakha, who wanted to marry Ram. To teach her a lesson, Lakshmana humiliated her by chopping her nose. Lord Ram and Lakshman along with monkey army of Sugriva and Hanuman decided to rescue her. On their way to Lanka, there was the vast ocean. Lord Ram ordered the Ocean to give him a way, but the ocean pleaded to him that he had the limitations and was bound to stay at his position. Ocean suggested him to pray Lord Shiva for a solution. Lord Ram made a Shivlinga of mud and sand. Lord Shiva appeared before him and suggested him to built Raam Setu. The Shivaling built by Lord Ram is known as Rameshwaram which means Lord of Ram. Raam is also the Lord of Hanumana, the incarnation of Lord Shiva. Nal had the expertise of an architect. He had the power to make stones float. A bridge across the ocean to Lanka was constructed under the supervision of Nala who volunteered for the task. They started dropping the stones in the Ocean. The stones dropped by Nala and Nila kept floating, but they drift in the sea and do not form a continuous structure, Hanuman suggested that to make the stones stick together, the name of Ram should be written on the stone before throwing it in the ocean. The remedy worked, and Lord Ram along with his entire army easily crossed the ocean and reached Lanka.