Vibhishana was the youngest half brother of demon king Ravana, who ruled over Lanka. He was the youngest son of sage Vishrava and Kaikesi, the son of sage Pulastya. Ravan, the king of Lanka and Kumbhakarn, were his elder brothers. Although Vibhishana belonged to demon race, he was pious and always considered himself a Brahmin, as his father was the one. Though he belonged to a demon family, he was a noble character. After Ravana had captured Sita, Vibhishana advised him to send her back, but Ravana was not ready to hear his advice. Vibhishan was against the kidnapping and abduction of Sita. Hence, Vibhishana decided to leave the kingdom. Before fleeing away from Lanka, he called his daughter Thirijata, who was guarding Sita in the Ashok-Vatika and advised her to take care of Sita until Lord Rama defeats Ravana. Only Vibhishan’s daughter Thrijata and his wife Sarma knew that Vibhishana had planned to join Lord Rama. 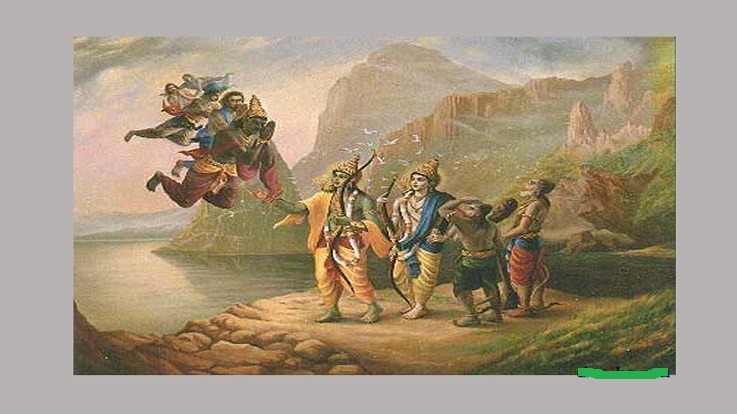 When he left to meet Lord Ram, he carried his mace along and is accompanied by two of his loyal demons. As soon as Vibhishana saw Lord Ram, he fell on his feet. Seeing the mace in his hand Lord Rama understood for what Vibhishan had brought the mace and the reason for his birth in the world. Lord Ram knew that Vibhishana is his Mace (Lord Vishnu has a mace in his hand), Lakshman is Adishesha, Bharata and Shatrugna are Conch shell and the Sudarshan Chakra. It is believed that whenever Lord Vishnu appears in this world to destroy the evil, his accompaniments are also born as human to help him out throughout his journey to fight evil.

Vibhishana was a noble person with pure heart and soul. He was a pious man and spent all his time in meditation. Pleased by his devotion, Lord Brahma offered Vibhishan a boon. Vibhishana said that only thing he wanted was to serve the Lord. He asked for the strength so that he could always remain in association with Lord Vishnu and also wanted a holy sight of the Lord. Vibhishana's prayer was granted. He gave up his wealth and family to join Lord Ram, who was the incarnation of Lord Vishnu.

During the Lanka war, Vibhishana became a valuable asset to Lord Ram as he disclosed many secrets and thus became the key factor in Lord Rama's success during the war. Vibhishana revealed the path to the temple of Goddess Nikumbala. Lakshman went to the temple and destroyed the Yajna which was performed by Indrajit. Vibhishana is a symbol of devotion. After Ravan's death, Lord Ram coroneted Vibhishan as King of Lanka. Vibhishana transformed his subjects to the path of righteousness. His wife Sarama was also a pious lady and helped Vibhishana in his effort. When Shri Rama left for Ayodhya, he revealed his original form as Lord Vishnu. He asked Vibhishana to stay on earth to show the path of truth and righteousness. Vibhishana is one among the eight immortals. Lord Vishnu also asked Vibhishana to worship Lord Ranganatha, the family deity of Sun Dynasty, to which Lord Ram belonged.