This is the birth story of Pawanputra Hanuman, the son of Kesari and Anjana. He was well-known for his incomparable devotion for Lord Rama. With his selfless service and devotion, Hanuman had won the love of Lord Rama and his family and he could not think of anything else but their comfort and well-being.

Once upon a time, in the mountains of Meru, there was the great sage named Gautam. A monkey-couple, Kesari and Anjana lived nearby the ashram. Anjana was once a heavenly maiden, who was cursed and transformed into a monkey woman. She would be freed from this curse only if she gave birth to an incarnation of Lord Shiva.

The reason Anjana was cursed was once when she was wandering on earth, she saw a monkey meditating deeply in a forest. At the instant she saw the monkey acting like a holy sage. She was unable to control her laughter. She made fun of the monkey but the monkey ignored her foolish behavior. She did not only continue her laughter but even threw some stones at the monkey and continued to do so till the holy monkey lost his patience. He opened his eyes that sparkled with anger and he was indeed a powerful holy sage who had transformed into a monkey to do his spiritual meditation. He with ferocious voice cursed her that ‘She has performed an evil task of disturbing a sage’s meditation and so was cursed to take the form of a monkey and that she will be relieved from the curse only if she gives birth to a mighty son, an incarnation of Shiva’.

Anjana blessed with a son:

Anjana’s dedicated prayers and meditation to Shiva without any food or water soon gave her fruitful results. Lord Shiva was impressed with her prayers and wished to bless her with a son who will be immortal.

On the other hand, in a far away kingdom King Dasaratha of Ayodhya, was performing a religious Ashvamedha Yagna to have children who was blessed with a divine sweet by Lord Agni that was to be shared among his three wives. And Vayu, the Wind God, under the instruction of Lord Shiva carried a portion of the sweet, gave it to Anjana and blessed her. Anjana soon ate the divine sweet and instantly she could feel the blessing of Shiva. Vayu told her that she will soon be a mother of a son who will possess intelligence, courage, tremendous strength, speed and the power to fly. Her happiness had no ends and she was over-whelmed with joy. 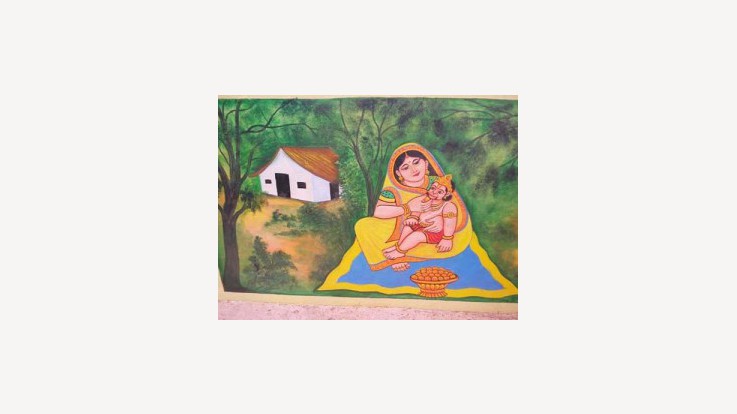 Anjana Devi with her son Anjenaya

Soon Anjana gave birth to a monkey-faced child and they named him as Anjaneya (meaning ‘son of Anjana’). No sooner Anjana was released from her curse and wished to return back to heaven. Hanuman’s father took care of Anjaneya and he grew up to become a strong but mischievous young boy.

Once Anjaneya, eventually had burnt his mouth and Lord Indra had injured his jaw as he took the sun to be a tasty fruit and flew-up into the sky towards the sun to eat it. 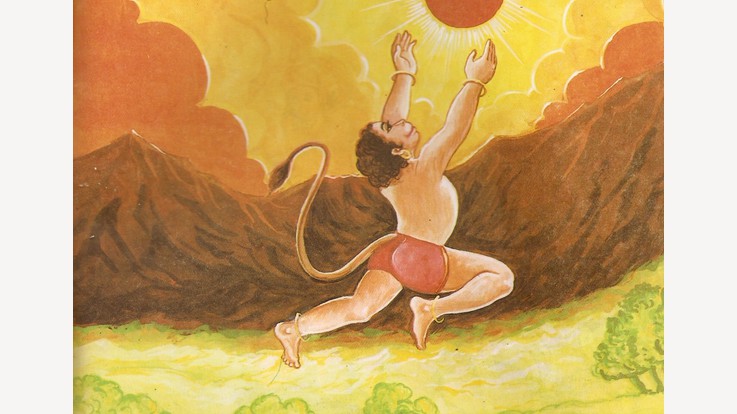 Young Hanuman reaching out for the sun

Anjaneya has been called by many names such as Hanuman, Maruti (Vayu’s other name), Pawanputra and so on. He played an important role in Ramayana and was a great devotee of Lord Rama and Sita Devi.