Dharmshala, is a city in the Kangra district of Himachal Pradesh,India. It is a beautiful, awe-inspiring place. It has an impeccably serene environment. The ambiance is so pious and divine that it has been the center for Tibetan exile and has been chosen by the Dalai Lama as a suitable habitat.Located in the upper reaches of Kangra valley, this city is surrounded by dense coniferous forests consisting mainly of stately Deodar cedar trees. The suburbs include McLeod Ganj, Bhagsunath, Dharamkot, Naddi, Forsythganj, Kotwali Bazaar, Kachheri Adda, Dari, Ramnagar, Sidhpur and Sidhbari. 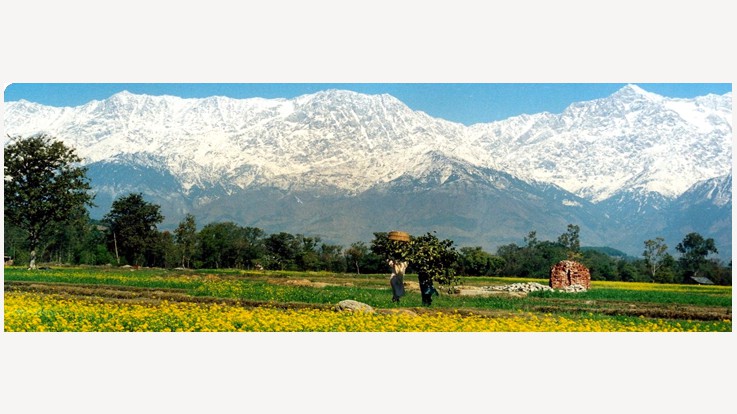 From the beginning of time until British Raj, Dharamshala and its surrounding area was ruled by the Katoch dynasty. The natives of this area are called Gaddis, basically a nomadic tribe. Gaddis lost their land and other possessions when British and Gurkhas arrived to settle.The 21st Gurkha regiment was shifted to this place and Dharmshala became their temporary cantonment. The valiant regiment is famous across the world for its dexterity and valor.

Geographical Location:Dharmshala is situated at an altitude of 1457 meters, in the shadow of Dahauladhar Mountains in Kangra Valley.The city is divided into two parts- Lower Dharmshala or Dharmshala and McLeod Ganj. “Lower Dharamshala” is the area surrounding Kotwali Bazaar and the market included. The McLeodGanj is separated in between by the village of Ganchen Kyishong, home of the Tibetian government in exile. It is bounded on all sides by thick forests of pine, Himalayan oak and rhododendron.

Fascinations:Dharmshala International Film Festival- The international film festival organized here, every year is a great attraction.  This annual feast witnesses a myriad of movies (combination of movies from India and abroad). Film critics, media personnel and personalities from the film industry arrive here for this festival.

Dharmshala Cricket Stadium- By the virtue of its backdrop, this is one of the most attractive cricket stadiums in India. This stadium hosts many international matches every year. This brings cricket fanatics and supporters to this city of Dharamshala.The snow-capped mountains add to the enthralling charm of this place.

Places to Visit:Masroor: The fifteen exquisitely carved monolithic rock temples are the major attraction this place. Dating all the way back to 8th century, the carvings of these temples are similar to Ellora temples. The deity worshiped is Goddess Laxmi and Sita and Lord Ram.

Bhagsu Waterfall: 2 km from McLeod Ganj, this water fall lies behind Bhagsunag temple and is an enchanting view.

Bhagsunag Temple: This is a temple dedicated to Lord Shiva. It is a revered temple among the Gurkha platoon villages in Dharamshala. The waterfall in the vicinity is a stupendous view.

Kangra Museum:  It is a unique museum with its very peculiar collections displaying the rich cultural heritage and artifacts of Tibetian and Buddhist cultures. Some of the items exhibited are as old as 5th century.

Naddi: Inducing sheer ecstasy, this place is a picturesque beauty and make a perfect picnic spot. Some  trekking options  are also available.

McLeodGanj: At a distance of 9 km from Dharmshala, this place is famous for its market and food. The beautiful Buddha statue is also ensconced here that mesmerizes the visitors.

Chamunda Temple: The legend goes that Goddess Kali killed Chand and Mund at this place. This makes this temple a very revered destination. People come here to offer their obeisance to the Goddess.

Dal Lake: Sprawled across an area of  1 km. This beautiful lake is bounded on all sides by thick forests of deodar, oak and pine trees. In its vicinity is another temple dedicated to the revered sage Durvasa.

There are other very enticing and charming places in Dharmshala and its close proximity, worth visiting, such as Kunal Pathri Temple, Triund, Thaneek Pura, Sidhbari etc. The overall experience of this visit will remain etched in your memory forever.

How to reach Dharmshala

Air - The nearest airport is Gaggal(13 kM) and Chandigarh (275 Km) away from Dharamshala. Gaggal is well connected with Delhi.

Train - The nearest railway stations are Pathankot (85 km), Kangra Mandir (22 km). Pathankot is most connected one with other major cities.

Road - Dharmshala can be reached by road from Delhi(520Km) or Chandigarh(275 Km). Pilgrims can find many buses and taxies from Delhi and Chandigarh.