A week long Ambubasi Mela is organized during the monsoon (Assamese month of Ahaar) at Kamakhya temple in Guwahati, Assam. According to Hindu calendar, the fair is held when the sun transits to the zodiac of Mithun when the Brahmaputra river is in spate. It is an important festival of the Kamakhya Temple of Guwahati. Ambubachi is related to the “Tantrik rituals.” It is believed that the temple Goddess Devi Kamakhya, goes through her annual cycle of menstruation during this time. The presiding deity is worshipped in the form of a yoni-like stone over which a natural spring flows. For the devotees of goddess Shakti and the locals, this festival is of great importance. The fair attracts thousands of devotees from all over the country. 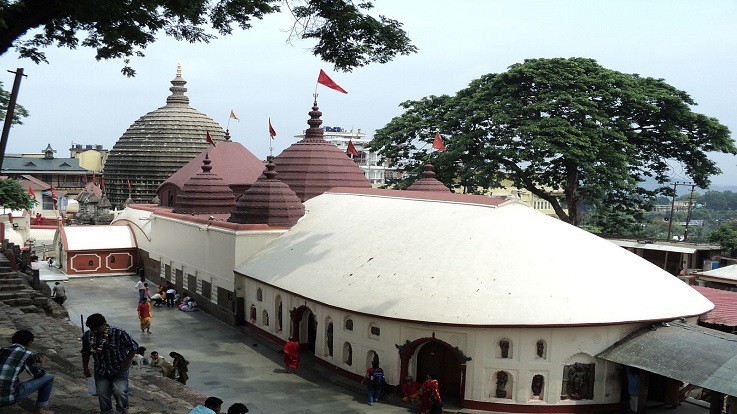 A view of the famous Kamakhya Temple

During the Ambubasi fair the doors of the Kamakhya Temple remain closed for three days. The devotees get accumulated in the temple premises and wait for the auspicious fourth day when they are allowed to worship the Goddess in the temple. During these three days farming work, cooking, and reading holy books, daily puja and other religious performances are prohibited during the Ambubsi fair. After the three days, the doors of the Kamakhya Temple are reopened. It is believed that the Mother Earth has retrieved her purity. It is purely a ritual of the Tantrik cult. On the fourth day, the devotees are allowed to enter the temple for worshipping Devi Kamakhya. The fair is also known as Ameti or Tantric fertility festival since it is associated with Tantric Shakti cult. The fair is held every year during monsoon in the Kamakhya temple at Guwahati. The gathering of sadhus and pandas from all over the country, the locally available art and craft items makes it an interesting place to visit. 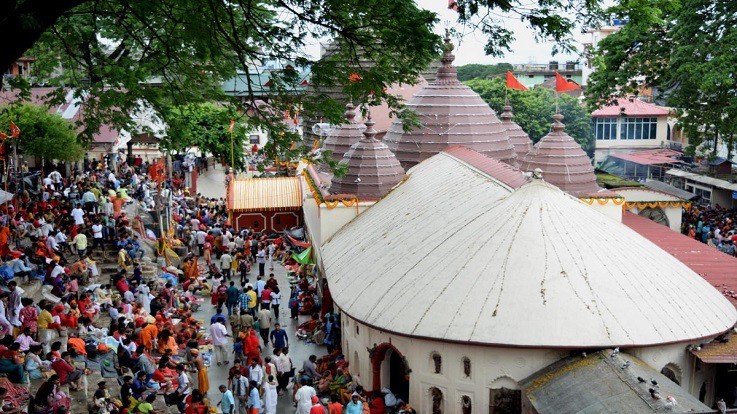 A view of the celebration during the fair

A legend related to Lord Shiva and his consort Goddess Parvati behind the origin of this traditional fair. It is believed that since her childhood, Goddess Sati wanted to marry Lord Shiva. She performed rigorous fast and meditation to please Lord Shiva, who agreed to her wish and accepted her as his wife. However, Sati's parents were not happy. Once, Sai's father King Daksha organized a yajna. He did not invite his daughter and son-in-law. Angry Sati went to her father's place to seek an explanation. But Daksha insulted Lord Shiva by calling him wild. She could not bear the insult of Lord Shiva in front of the guests. Hence, she jumped into the yajna fire and killed herself. Furious Lord Shiva came to Daksha's palace. On seeing the dead body of Sati, he became so enraged that he carried the body on his shoulder and started Tandav, the dance of destruction for several days. The earth was on the brink of being destroyed. Gods and sages appealed to Lord Vishnu to calm down Lord Shiva. Hence, Lord Vishnu chopped Sati 's body with his Sudarshan Chakra. It is said that the body parts of Sati fell at different places which are worshipped as Shakti Peeth. The yoni of Goddess Parvati had dropped atop the Neelachal hill in Guwahati where the Kamakhya temple stands.

Another legend says that Narakasura, the demon fell in love with Goddess Kamakhya and he wanted to marry her. To save herself, Goddess Kamakhya laid a condition that she would marry him only if he builds a temple within a night. Narakasura agreed, and he almost finished building the temple overnight. Before he could complete the temple, a cock was sent to cry cock-a-doodle-do to announce the arrival of the morning. As per the condition, Narakasura couldn't marry goddess Kamakhya. It is said that the present Kamakhya temple is the same that Narakasura had built for the Goddess.

The fare is the pride of Guwahati which is centrally located in the heart of Assam and well-connected with other parts of the country by air, train, and road.

By Train: Guwahati Railway Station is 8 km away from Kamakhya temple.

By Road: Guwahati is well-connected with the major towns of India by road. Nepali Mandir is the nearest bus stop. Regular Buses also ply to and fro Kamakhya Temple

By Air: Guwahati Airport is the nearest airport.