Dattatreya Jayanti or Datta Jayanti celebrates the birthday of Lord Dattatreya (Datta) who is a combined form of Lord Brahma, Lord Vishnu, and Lord Shiva. It is observed on a Purnima day of the Margashirsha month. Deity Dattatreya guides the devotees to live a prosperous and ideal life. Worshipping Lord Datta helps devotees to lead a prosperous life. Lord Datta also helps the soul of ancestors of family members to give momentum on their journey after death. It is said that that the three heads of Lord Dattatreya represents serenity, peace, and prosperity. 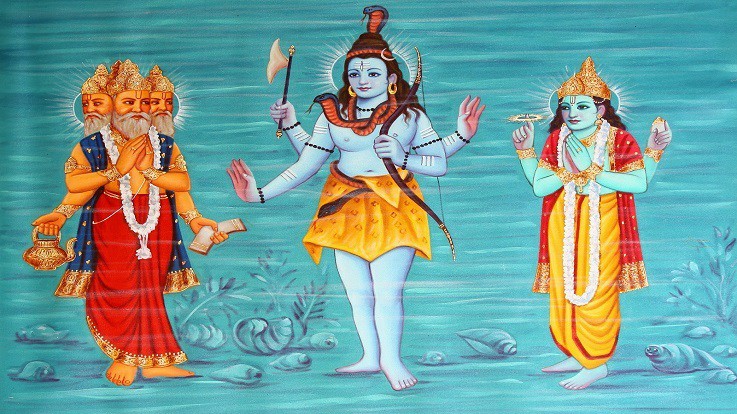 The tridev. Brahma Vishnu and Mahesh

It is believed that Lord Dattatreya possesses the powers of the Trinity. Lord Dattatreya provides the relief from the major problems of life and removes the obstacles from the path of success. The devotees are blessed with the powers of the trinity and achieve the success in life. The six hands of Lord Dattatreya holds Shankha, Chakra, Gada, Trishul, Kamandal and a bowl. The Shankh represents the divine sound; the Chakra stands for the time; Gada is considered as a symbol of pride; Trishul represents triple energies; Kamandal signifies that Lord Dattatreya is the carrier of life on earth; bowl signifies that the individual should donate his pride; negativity; ego and evil thoughts.

Dattatreya was the son of Anasuya and sage Atri. Anasuya, an archetypal chaste and virtuous wife, did severe austerities to beget a son equal in merits as Lord Brahma, Lord Vishnu and Lord Shiva, the Hindu male trinity Trimurti. Once, sage Narad boasts about the penance of Anusya towards her husband. Goddess Saraswati, Lakshmi, and Parvati, the goddess trinity became jealous. They decided to challenge Sati Dharma of Anasuya. They sent the Trinity god to test her virtuousness. The three gods appeared before Anasuya in the disguise of sanyasis and asked her to give them alms naked. Anasuya uttered a mantra and sprinkled water on the three mendicants, turning them into babies. She donated the alms as they wished. Anasuya narrated the event to sage Atri. He hugged the three babies, transforming them into a single baby with three heads and six arms. As the trinity did not return, their wives got worried. The goddesses begged her forgiveness and requested her to return their husbands. The Trinity appeared in their true form and blessed Atri and Anasuya with a son Dattatreya. Dattatreya is an incarnation of Lord Vishnu, while his siblings the moon-god Chandra and the sage Durvasa are regarded forms of Lord Brahma and Lord Shiva respectively.

Seven days before Datta Jayanti, there is a tradition of recitation of the Shri Gurucharitra. The devotees wake up early, take a bath and observe fast for the day. Flowers, fruits, incense stick, lamp, and sweets are offered during the puja ceremony. Devotees sing devotional songs and read holy books such as Avadhuta Gita and Jivanmukta Gita. During the puja, devotees must apply sandalwood paste, Vermillion, and turmeric to the idol of the deity. After the completion of pua, devotees should take seven circumambulates around the Lord Datta’s idol.