Belief and Significance: Vat Savitri Puja or Vat Savitri Poornima is observed by married Hindu women in North India for the well-being, prosperity and longevity of their husbands. The fasting is based on the devotion and determination shown by Savitri to win back her husband Satyavan from the clutches of Yama (god of death). The prayer and pujas associated with Vat Savitri are observed at the community level or individually at home. Banyan tree symbolically represents Lord Brahma, Lord Vishnu and Lord Shiva. The root represents Lord Brahma, the stem represents Lord Vishnu and the upper portion is Lord Shiva. Vat Savitri Vrat Fasting begins on the Trayodashi day of Jyeshtha month and ends on Purnima. The fast is broken on the fourth day. Nowadays, many women observe the fasting only n the day of Purnima. 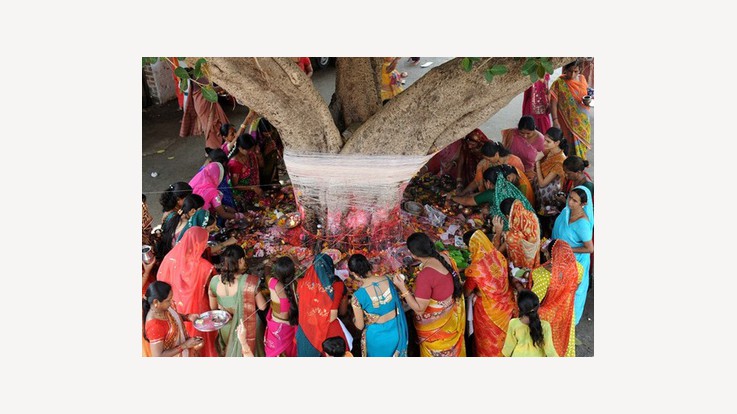 Puja/Vrat Ritual: On the morning of Trayodashi day, women apply a paste of Aavla (Indian gooseberry) and Gingli (sesamum) before taking the bath. Married women dressed up in bridal attire and offer prayers to Banyan Tree (Vat Vriksha). After offering, water, Akshat, Abil, Dhoop, Deep, Kumkum and flowers to the Banyan Tree, women ties a red or yellow coloured raw cotton thread around the tree. Women do Parikrama around the tree and chant prayers. During the vrat, women can eat fruits for all the three days. On the fourth day, the fast is broken after offering water to moon and prayers to Savitri. Women also distribute food, clothes and money to poor. It is very significant to listen to the story of Savitri and Satyavan during the vrat. 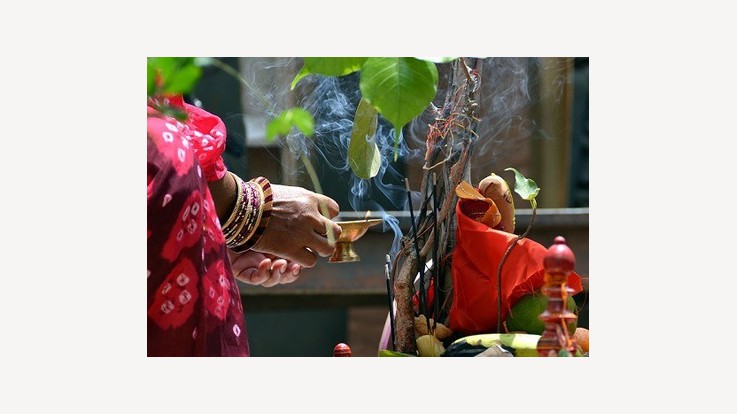 Legend: Vat Savitri honours Savitri, the legendary wife of Satyavan who rescued his soul from Yama, god of death. The celebration has an interesting story of Savitri and Satyavan. Savitri was a daughter of King Ashvapati. She fell in love with Satyavan, son of King Dhumatsen. According to his horoscope prediction, his life was too short. But Savitri wanted to marry him. After marriage, Savitri started doing penance for the long life of Satyavan. One day Satyavan was resting under a Banyan tree, and suddenly he died. The legate of Yama, the God of death came to take away the body of Satyavan. But Savitri confronted and refused to give her husband’s body. Messengers still tried to take Satyavan away, but in vain. At last, Yama, God of death, himself appeared in front of Savitri and requested her to let him take away Satyavan’s body. Savitri was still reluctant. Hence, Yama offered a boon to Savitri. She requested for the well being of her in-laws. He granted her wish. She kept following Yama as he took away Satyavan's body. To stop her from following, Yama offered her another boon. She asked for the well-being of her parents. This boon was also granted by Yama. But she was still adamant and continued to follow Yama. As they neared Yama's abode, he offered Savitri one more boon. She asked for children. He granted it. But there was a conflict. How it would be possible for her to beget children without her husband. Yama was stunned and realized the love Savitri had for her husband. Lord Yama was pleased with her devotion. He had to restore the life of her husband. Satyavan gave up his life under the Banyan tree and was granted his life under the Banyan tree. Hence, this day is known as 'Vat Savitri Vrat'. The world recognized her as the great "Sati Savitri".