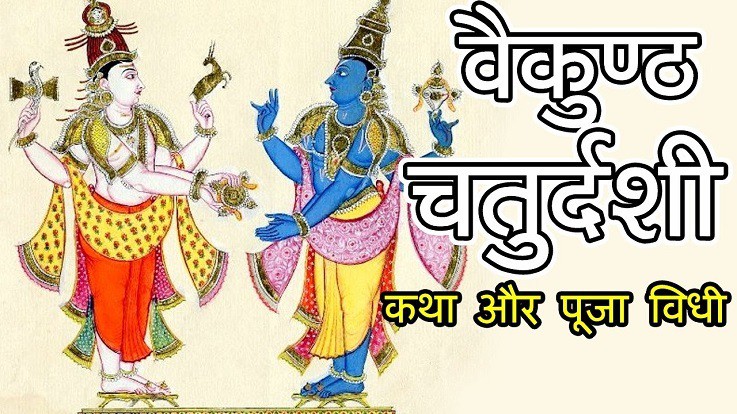 Observing fast on Vaikunth Chaturdashi has an immense importance. A bath should be taken early in the morning. Clean clothes should be worn. Lord Vishnu should be worshipped with flowers, lamps, and sandalwood. According to an ancient belief, Lord Vishnu took a pledge that he would offer one thousand Lotus flowers to Lord Shiva in Kashi. Those who offer one thousand Lotus flowers to Lord gets relief from all sufferings and go to Baikunth Dham after death. The devotees should light 14 lamps at the bank of the river in the evening. Kartik Shukla Chaturdashi is a symbol of the unity between Lord Shiva and Lord Vishnu.

Devotees of Lord Vishnu offer him a thousand Lotuses and recite Vishnu Sahasranama. The festival is also celebrated as Kartik Snan by Vishnu devotees. In Rishikesh, the day is observed as Deep Daan Mahotsav to mark the occasion of Lord Vishnu waking up out of his sleep. On Vaikuntha Chaturdashi, Lord Vishnu is given a special honour in the sanctum of Kashi Vishwanath temple, Varanasi. The temple is described as Vaikuntha. Both the deities are ritually worshipped. Lord Vishnu offers Tulsi leaves to Lord Shiva, and Lord Shiva offers Bael leaves to Lord Vishnu. Devotees perform puja after taking a bath. They fast for the whole day and offer Turmeric mixed rice, sandalwood paste, the sacred water of the Ganges, flowers, incense, earthen lamps and camphor to the deities.