The Story of the Great Shibi

The Story of the Great Shibi

Indian mythology holds a strong place in the hearts of millions across the globe.  Folklores mentioned in Indian epics are a source of inspiration and ideal living for people worldwide. One such beautiful recital is of Shibi. He was the son of Ushiinara King and a devotee of Lord Vishnu. The place is also known as Hastinapur at that point of history.  King Shibi was known for keeping his words, compassion and justice.

Hearing about his compassion and justice, Agnideva and Dev Indra wanted to test his greatness and humility. The Gods decided to test the greatness of Shibi’s limits of donation. Agnidev characterized him as a pigeon and Dev Indra took the form of an eagle. Portraying an eagle, Dev Indra started chasing Agnidev who was in the form of a pigeon. The pigeon entered Shibi chakravarti’s palace where he was seated with his court mates. The pigeon yelled “Save me O King”. Seeing this Shibi’s Guru said “O King! The pigeon has come to you for protection. Everyone has the right to survive and there is no better help than saving a being’s life”. 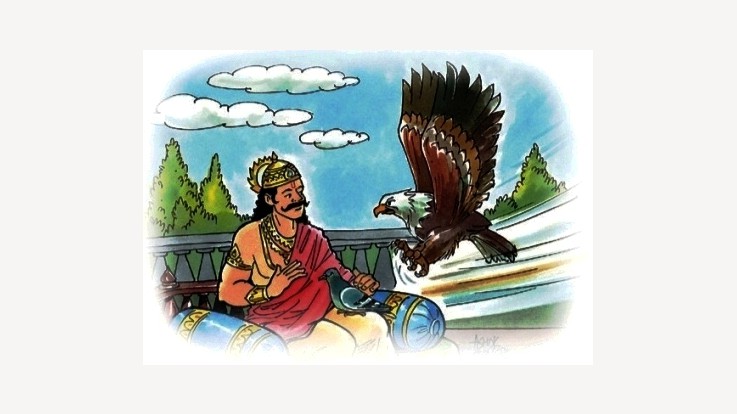 King Shibi with the pigeon and eagle

The pigeon requested the king to save him, as it was the duty of the king to protect the disabled. The eagle following the pigeon came to the palace.” O king every being takes a number of forms. The pigeon came to you for protection, but it is a meal for me. Please leave the pigeon, which is my food and save my life. If I do not eat I will die.

Shibi thought, “In a country ruled by a King, who does not give protection to his people, there will be no crops, no rain and the land will become barren. The people will curse the king and finally such a king will go to hell. On the other hand, he thought about the poor eagle, which was hungry and had chased the pigeon for so long.

Shibi requested the eagle to leave the pigeon. The King promised that he would give him tastier food than this. Listening to his plea the eagle replied “O' King! There can be nothing tastier than this pigeon and it was decided by Brahmadeva that they are food for us.”

Immediately Shibi ordered the court mates to get a balance. He kept the pigeon on one end of the machine and started to cut his thigh. However much he was cutting his flesh, it could not balance the weighing machine. Failing to equal the weight of the pigeon, he decided to sit on the other end of the balance. 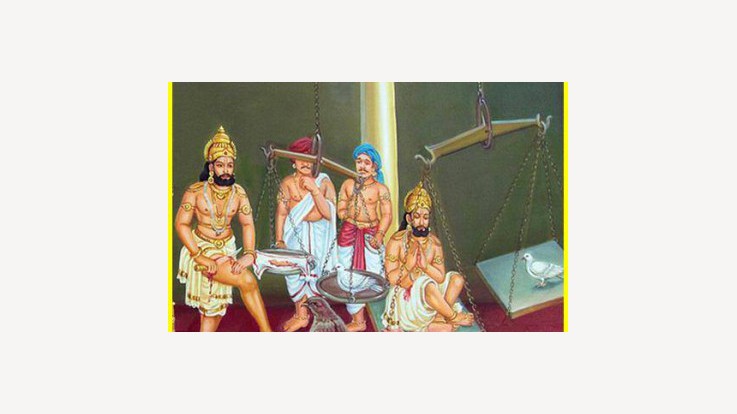 King Shibi siting on the balance

Seeing this step of Shibi, Agnideva and Dev Indra decided to reveal their identity. They told King Shibi that they had come to test his will for compassion and protection towards the other human beings. They announced that King Shibi had passed this test with flying colours and his name will be known over ages for his love and compassion.