The monkey King Kesari and Anjana were the parents of Hanuman. Anjana was an apsara but she was cursed that she would take the form of a money. Eventually, she married the chieftain of a tribe of monkeys. It is said that Hanuman was the son of Vayu. Anjana was blessed with a child by Vayu who would possess enormous strength. There are other legendary stories that tell us that Hanuman was an incarnation of Lord Shiva who came to earth to help Lord Vishnu who took the form of Rama to battle out the demons. Thus, Hanuman was not an ordinary monkey rather he was a form of the divinity who came to the earth to fight against the demons.

Anjana and Kesari, parents of Hanuman

The Real Meaning of Hanuman in the Sanskrit Language:

The word Hanuman comes from two Sanskrit words – Hanu and Man. The meaning of Hanu is jaw and man are disfigured. A legendary story says that when Hanuman was a child, he gulped the sun misinterpreting it as a huge fruit. Lord Indra intervened and used his vajra on Hanuman and his jaws were disfigured for his entire life. 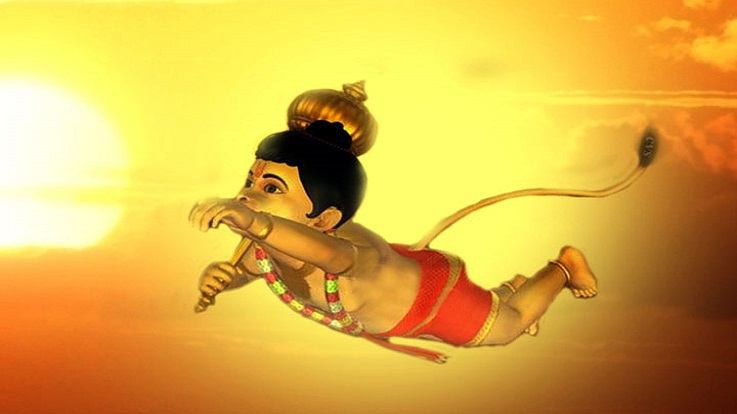 Anjaneya- The son of Anjana:

When Hanuman was a child, he was known as Anjaneya which means the son of Anjana. During his childhood, he was terribly mischievous and never gave a chance to his mother to sit and relax. He always kept the household running on their toes by his mischievous acts.

One day while Hanuman was loitering in the field, he had a glimpse of the sun through the mango tree, he thought the sun to be a mango fruit.

He was very happy to see such an ecstatic sight and jumped into the air out of joy. He tried to catch the sun and soon with the help of Vayu approached the sun and tried to catch it with his hands. Surya Deva was astonished to see a child approaching him and called Indra for help. Indra did not notice that it was a child who was approaching the sun and he hit Hanuman by his thunderbolt on his chin which made him unconscious. Vayu took his falling sons in his arms but could not revive his consciousness. Angered at this, he withdrew all the air from the three worlds turning the world into a vacuum place. Soon Brahma rushed to Vayu and asked him to stop the menace. Brahma helped Vayu’s son to get back his consciousness and blessed him with special powers. 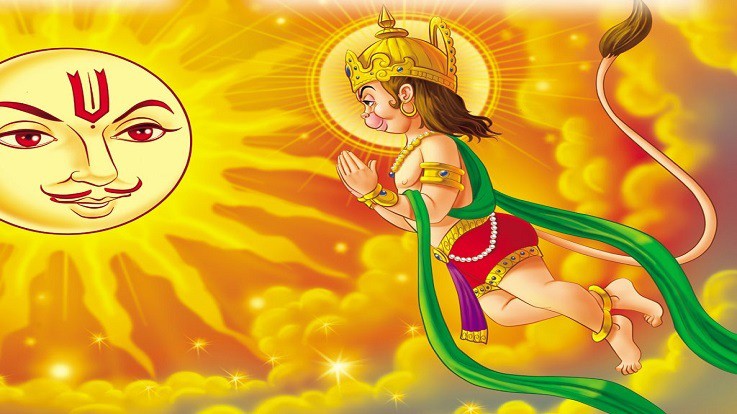 Hanuman thinking the sun as a fruit

The curse of the Sage:

As Hanuman grew older, he became more and more mischievous. He used his special powers and troubled people immensely. One day, he troubled a Rishi so much that made the rishi furious at him. He cursed Hanuman that he would forget all his special powers however the sage knew that Hanuman was born to perform special duties, so he also added that Hanuman would regain all his lost powers when the right moment will come.

Hanuman has been known as a superhero in the mythological epic Ramayana. When he grew up, he served Lord Rama and helped him defeat Ravana and freed Sita from captivity.