Overview:The Mundan ceremony is performed due to a belief that the newborn baby’s hair has the undesired traits of the past life. Hence, the hair of the newborn baby is considered impure as it may have the negative effects of the past life on the future life. So, head shaving is done to purify the soul of the baby and ensure the prosperous life of the baby. It is also believed that Mundan reduces the body temperature of the baby and making the baby calm. It also enhances and improves the blood circulation. As per the Vedas, Mundan is a purifying ritual. There are sixteen Sanskars or ceremonies needed to be performed in a person’s life and Mundan puja is one of them. Mundan puja is also known as Chudakarana ceremony where baby’s hair is shaved off for the first time. Mundan Puja is performed for both boys and girls.

Mundan Puja Ritual: According to the holy Hindu scriptures, Mundan ceremony must be conducted during an odd month or odd year. The first, third and fifth year is considered auspicious for the Mundan ritual. Mundan ceremony is an important ritual in India where relatives and friends are invited to bless the newborn child. This first haircut of a child has an important significance. A Priest conducts the Mundan rituals as per the Vedic traditions. A barber is called to shave off the hair. The priest starts with the Havan and recites sacred hymns and chants. The baby has to be seated on father’s lap. Priest shaves a part of the head. The barber then shaves the entire head, leaving a clump of hair at the back of the head. A paste of turmeric and sandalwood is applied on the entire head to cool down the head and to cure the cuts if any. A part of his shaved hair is offered in the sacred rivers at holy cities such as Haridwar and Varanasi. 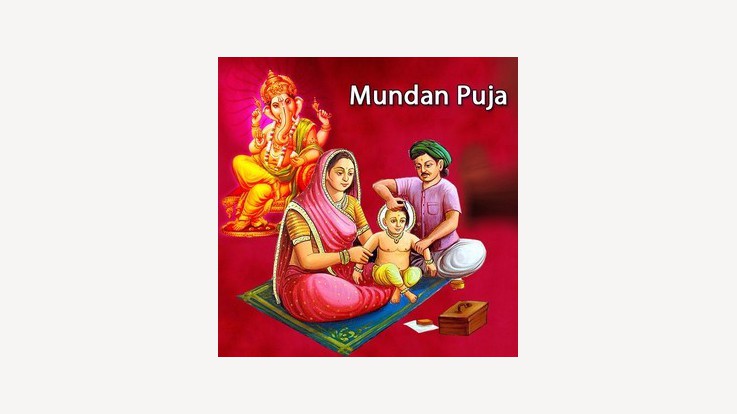 Belief and Significance of Mundan Puja: As per Hindu scriptures, a soul travels through eighty-four lakh ‘Yonis’ before acquiring a human body. Each ‘birth’ has a certain influence on the human birth of the baby. Mundan is a purification ceremony which ensures that the baby is cleansed of all the undesirable effects of all the earlier births. It is a ritual to purify the soul from the previous ‘births’. Mundan is an important ceremony. It is believed that the intelligence commences from the earliest days of life. The tonsure triggers the flow of intelligence and also improves the flow of knowledge. There is a significant reason behind shaving the head in such an elaborate traditional way. Medically, it is believed that shaving off the hair stimulates the cells and tissues which in turn improve blood circulation to the brain. This gives the child a long life. A person’s intelligence is developed in his or her infancy days. This sanskar is done to trigger intelligence and knowledge in the child.

Significance of Aayush Puja and Havan