Manikarnika Ghat is one of the oldest Ghats in the holy city of Varanasi. According to the legends, Devi Sati’s ear ornaments had fallen at Manikarnika Ghat, and hence the place is revered for Hindu devotees. It is believed that those who perform the ritualistic Manikarnika Snan on Kartik Shukla Chaturdashi attain ‘moksha’ or salvation. Devotees get rid of their sins and the continuous cycle of birth and death. 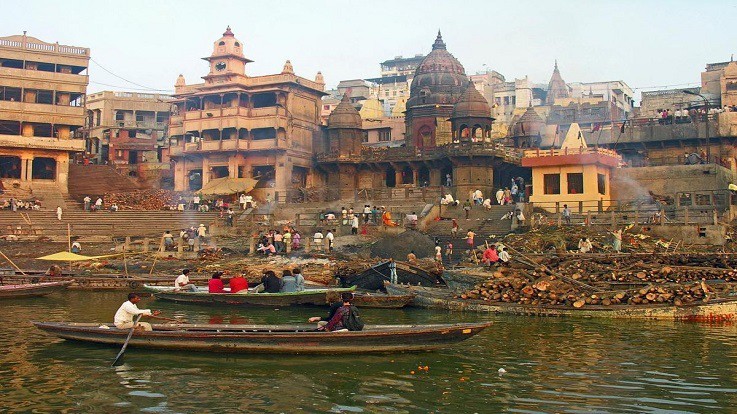 As per the legends, Devi Sati set herself ablaze when her father Daksh Prajapati, son of Lord Brahma tried to humiliate her husband, Lord Shiva during a Yagya ceremony organized by him. Hearing about Sati’s death, Lord Shiva became furious. He carried Devi Sati’s body and performed Taandav. To pacify Lord Shiva, Lord Vishnu used the Sudarshana Chakra, which cut through the Sati's corpse. The various body parts of Sati fell at several spots and formed sites which are known as Shakti Peethas. A jewel or Mani from her ear fell at Manikarnika Ghat which was dug by Lord Vishnu for the bathing of Goddess Parvati and Lord Shiva. Hence, the ghat was named Mani Karnika.

Another version says that the ear jewel of Lord Shiva fell from his ears, while he was performing Taandav.

Devotees get up early and meditate. The bathing ritual on the Manikarnika Ghat is performed during the last quarter of the night. Devotees offer prayers and seek blessings from Lord Shiva and Goddess Sati. They seek forgiveness for their sins. Reciting Vedic mantras and reading religious scriptures on the day of Manikarnika Snan is very auspicious. Offering donations in the form of clothes, money or food is also an important ritual of the day after performing the Manikarnika Snan.