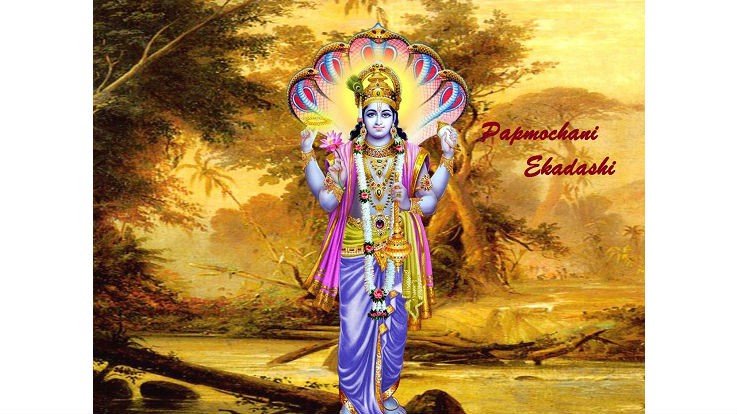 Significance and Legend of Papmochani Ekadashi

Sage Medhavi was an ardent devotee of Lord Shiva. He used to perform strict meditation in the forest of Chaitraratha which was full of beautiful flowers. The Chaitraratha forest was frequently visited by Lord Indra and Apsaras. Apsara, "Manjughosa" tried many ways to seduce sage Medhavi but she was unsuccessful in her every attempt due to the power of his sobriety. Manjughosa stayed a couple of miles away from the sage and started singing. She sang so beautifully that Lord Kamdev got excited. When Manjughosha looked at an attractive body of the sage Medhavi, she got restless by lust. She started singing seductively. Kamdev drew Medhavi’s attention towards Manughosha through his powerful magical bows. Medhavi stopped his meditation and got trapped in Manjughosha’s charm. He lost his purity of mind. He got attracted to her charm for a very long time. After living a married life for many years, Manjughosha lost her interest in the sage and decided to abandon him. When Manjughosha asked Medhavi to allow her to leave, he realized that he was cheated. Fuming with anger Medhavi cursed her to become an ugly witch. Medhavi returned to his father Sage Chyavana’s ashram. Sage Chyavana asked Medhavi to observe fast on Papamochani Ekadashi and assured him that his sins would be removed by observing fast. Medhavi observed the fast with devotion to Lord Vishnu and got relieved from his sins. Manjughosha also observed the Papmochani Ekadashi fast and regretted her wrong deeds. She was also relieved from her sin

The rituals of Ekadashi fast are started from Dashami, a day before Ekadashi. Devotees are abstained from taking normal food items. Only simple food is consumed by the devotees. A sacred bath is taken at a nearby river or lake. Flowers, sandalwood paste, incense sticks, and Bhog (sacred feast) are offered to Lord Vishnu. Devotees chant mantras of Lord Vishnu and praise him.