Story of Jatayu and Garuda

Story of Jatayu and Garuda

About Garuda- the Eagle God:

Garuda was married to Unnati, and they had two sons – Sampati and Jatayu, both of whom play important roles in the Ramayana. He has many names. He is Rakta-Paksha, Gaganeshwara - ‘Lord of the sky.’ Suvarna kaya- ‘Golden bodied,’ Sweta-Rohita- ‘The White and Red,’ Khageshwara- ‘ King of the birds,’ Taraswin, ‘The Swift,’ and Vajrajit.

Sage Kashyapa had two wives, Kadru and Vinita. Kadru was a mother of thousand snakes, the ancestors of the Snakes on earth. Vinita gave birth to the mighty Garuda. Once, Kadru and Vinita argued over the colour of the tail of the Uchaishravas – a seven-headed flying horse which was obtained during the Samudra Manthan. Kadru (mother of the snakes/serpents) claimed the colour was black and Vinita (mother of mighty Garuda) argued that it was white. The deal was whoever lost the argument will serve the other. Kadru cheated by asking her sons, the Nagas, to hang on to the tail of Uchaishravas. Thus the white tail of the horse turned black. Vinita and Garuda were forced to serve Kadru. They were ill-treated by Kadru and her sons. Later the Nagas agreed to free Garuda and his mother if he brought the Amrit, or Elixer which was in possession of Lord Indra. Garuda got Nector from heaven and released himself and his mother. But cheating and insult made Garuda the arch rival of Nagas. 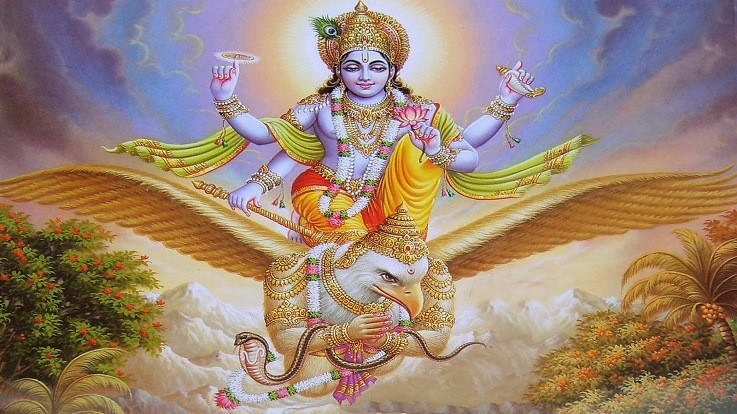 Lord Vishnu along with his ride Garuda

When Garuda stole the pot of Nectar, Lord Vishnu was impressed with his integrity as he did not take a single drop of the tempting Nectar for himself. Hence, Lord Vishnu asked Garuda to for a boon. Garuda said that he wanted a position higher than Lord Vishnu. Lord asked Garuda to adorn his flag and sit atop the flagstaff. Garuda was so taken over by the gesture of the great Lord Vishnu that he promised to be his mount. Garuda is renowned for his speed. His wings produce a gush of the wind which causes a tremor in the mountains, a loud flutter in the sea water and overturns a large number of trees.

In the Indian epic Ramayana, Jatayu is the youngest son of Garuda. His brother, Sampaati, a demigod has the form of a Vulture. Sampatti was a friend of Dasharatha (Rama's father). When young, Jatayu and his brother Sampaati would compete as to who could fly higher. On one such instance, Jatayu flew so high that he was about to get seared by the sun's flames. Sampati saved his brother by spreading his wings and shielding Jatayu from the hot flames. In the process, Sampaati got injured and lost his wings. Hence, Sampaati lived wingless for the rest of his life. 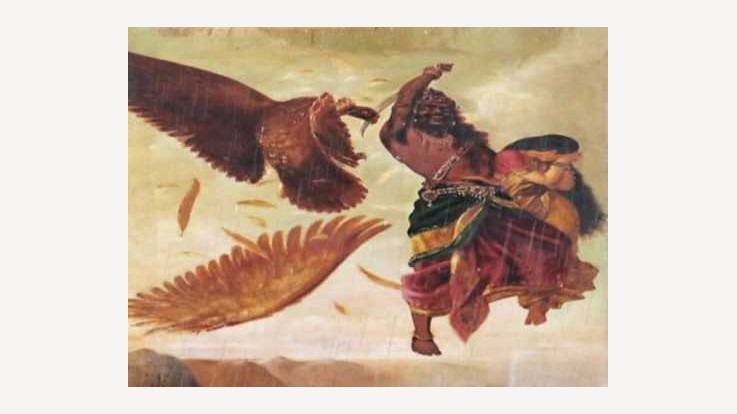 In Ramayana, when Jatayu sees Ravana abducting Goddess Sita, he tries to rescue Sita from Ravana. Jatayu bravely fought valiantly with Ravana, but as he was very old, Ravana soon got the better of him. As Rama and Lakshmana chanced upon the dying Jatayu in the search for Sita, he informs them that he had gone towards South. When Jatayu was wounded and lying on the ground, Lord Ram sensed the end, and he then slammed an arrow into the ground to call all seven sacred rivers, called Teertha so that Jatayu gets Moksha.