Nestled in Nevasa taluka of Ahmednagar district, Maharashtra, Shani Shingnapur village is known for the temple of Lord Shani. The village of Shingnapur is also famous for the fact that no house and shops in the village have doors. Despite this, no theft was reported in the entire village. Shani temple is considered as a "jagrut devasthan" meaning that a deity still resides in the temple deity. Villagers believe that Lord Shani punishes anyone who attempts theft. The temple idol has been self-emerged from the earth in the form of a black stone. It is believed that Shanaishwara idol was found by local shepherds. The temple is in existence since the start of Kali-yuga. The shrine of Lord Shani houses five and a half ft tall black rock which is installed on an open podium, which symbolises Lord Shani. A trident) is placed along the side of the image. An image of Nandi is installed on the southern side along with the small images of Lord Shiva and Lord Hanuman. 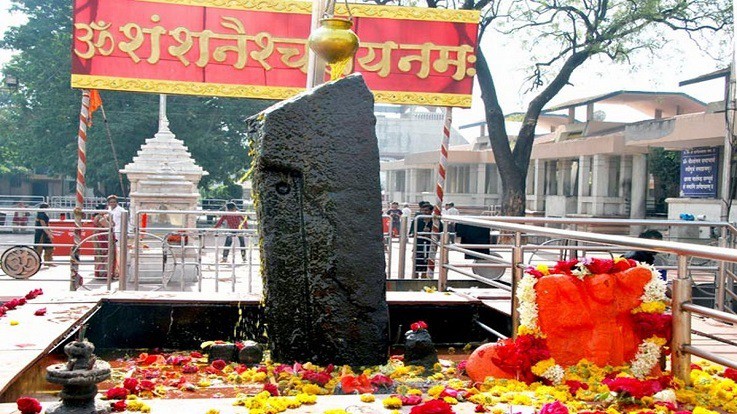 The story of the self-emerged statue of Lord Shani goes something like this. Once, a shepherd touched the black stone with a pointed rod. The stone started bleeding. The shepherds were amazed to see this. Soon the whole village gathered to witness the miracle. On that night Lord Shani appeared in the dream of the shepherd. He told the shepherd that he is Lord Shanaishwara and that unique looking black stone is his self-manifested form. The shepherd asked whether he should construct a temple for him. To this, Lord Shani replied that no roof is needed as the whole sky is his roof and he would like to be enshrined under an open sky. He instructed the shepherd to perform daily puja and 'Tail-abhisheka' on every Saturday. Lord Shani also promised that the entire region would have no fear of dacoits or thieves. Hence, Lord Shani is seen in the open yard without any roof above. Till today, there are no doors for any houses, shops, temples, and even post office. 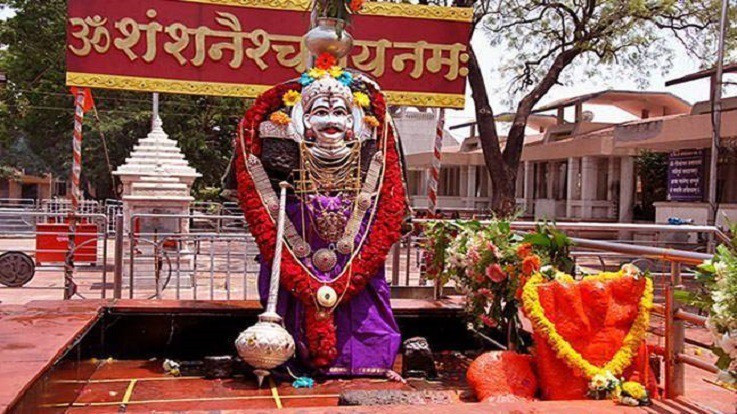 The lord after his shringar

The temple organises a fair in honour of the deity on Shani Amavasya. Thousands of devotees come to seek the blessings of Shani dev. A palaki procession of Shani is held on the day of the fair.

By Road: Buses, auto-rickshaws, and other private vehicles are easily available to reach the temple from all the major cities of Maharashtra.

By Air: The closest airport is Aurangabad airport (78 km).

By Train: Ahmednagar (36 km) is a nearby railway head.