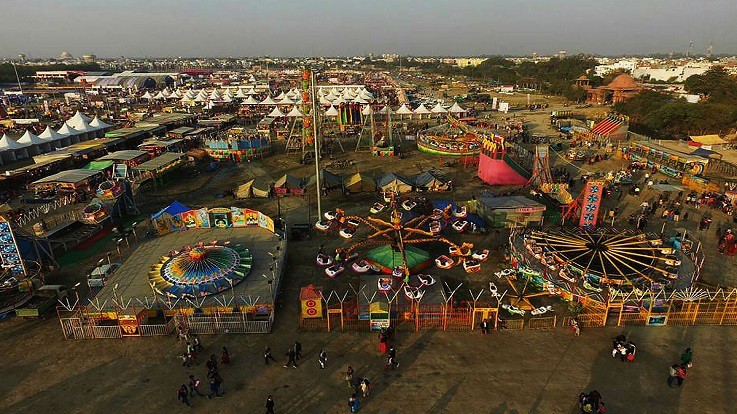 A glimpse of the Lucknow Mahotsav

The major attractions of Lucknow Mahotsav are comprised of showcasing Awadh culture which includes Qawwalis, Ghazals, Thumri, traditional plays, kathak dance, sarangi-sitar recitals, village games such as kite flying, cock fight, and Ekka race. The exhibition also houses food stalls and beverage stalls which offer delicious and famous delicacies of the Nawabi cuisine such as Kakori Kabab, Tunde Kabab, Kesaria Doodh, Kabab Paratha, Thandai, Aaloo chat, and Kulfi Falooda. Every year Crafts Fair is held in Lucknow Mahotsav which allows Craftsmen to put up stalls for selling their crafts work. Lucknow Mahotsav is a perfect place for buying all the things related to Lucknow and its culture. To enhance the grandeur of the festival, various cultural events, celebrities’ performances, and several interesting competitions are organized during the festival. Lucknow Mahotsav also has an arrangement of fun filled rides for adults as well as children. The prime objective of Lucknow Mahotsav is to enhance tourism and to encourage artisans.

How to Reach: Lucknow is well-connected by air, train, and road.

By Air: The nearest major airport is Chaudhary Charan Singh Airport which is 11 km away from the centre of Lucknow.

By Road: Lucknow has a well-maintained network of roads which connect it to all the major towns of India.

By Train: Lucknow Charbagh station is the nearest railway station.