Van Mahotsav is dedicated to planting trees – saplings. It is celebrated during the first week of July. Van Mahotsava was started in the year 1950 by K. M. Munshi, then Union Minister for Agriculture and Food. The festival has achieved national importance. During the first seven days of July, millions of trees are planted across all part of India. The government of India promotes the celebration of Van Mahotsav among children as well as adults. The event learns about the alternate, food source, fuel source, shelterbelts around fields. It also spreads the awareness about tree plantation among individuals as it may prevent global warming and diminish pollution. 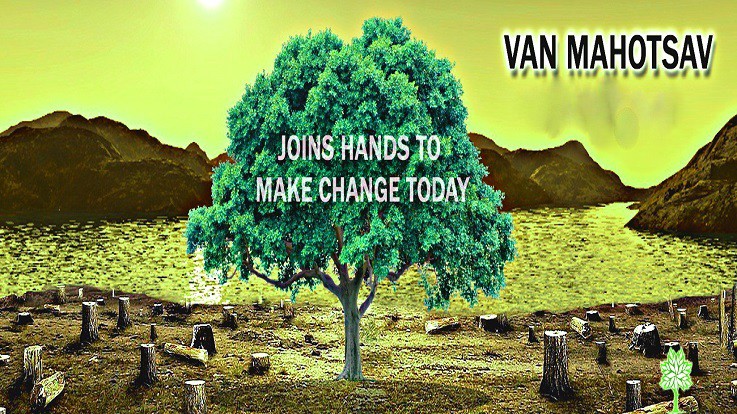 Lets make a difference by planting a tree

The planting of trees during Van Mahotsav has following purposes:

• To raise production of fruits and add it to the food resources of the country.

• To provide fodder leaves for cattle since it relieves the intensity of grazing over reserved forests.

• To improve and enhance the productivity of agricultural land

• To help conservation of soil and maintaining its fertility.

• To popularize the planting of trees and saplings

Van Mahotsava is a festival of forests. It has gained significant national importance. Every year, millions of saplings are planted during Van Mahotsav week, and it has helped to generate enthusiasm among masses for forest conservation and planting trees. The festival is simultaneously celebrated in several states in India. Till now millions of saplings of diverse species have been planted with the participation of local people and forest department. In the year 2016, the tree cover of India including forests and non-forest areas was 24%. The Government of India has set a target of 34% cover by 2020. Van Mahotsav also spreads awareness about the harm caused by the cutting down of trees, and it is that every citizen of India will plant a sapling in the Van Mahotsav week. During Van Mahotsav, the native trees are planted as they are most readily adapt to local conditions, integrate into eco-systems, have a high survival rate, and supports local birds, insects, and animals as well. July is the onset of the monsoon season in India, and hence it is the best time for tree planting is most likely to be effective.

As a part of Van Mahotsav celebrations throughout the country, afforestation drives are launched to retain the vanishing forest covers of the country. In the name of urbanization and globalization of cities, trees are considered as a major hurdle. In a bid of constructing flyovers, roads, hoardings, and pavements, the easiest way is to get rid of them altogether. The declining number of trees has brought a massive change in climate. Hence, a dire necessity of festival such as Van Mahotsav, to restore the forest cover is the need of the hour. 'Van Mahotsav' festival is an initiative to save the environment, to which we owe a lot.