India is famous for its rich culture and tradition. The country is also called the land of festivities and celebration. Synonymously known as Vijay Dashmi, Dusherra is celebrated to commemorate the victory of good over evil. Dusherra is known by a number of other names like Dasara or Dashain or Durgotsav.

Dashmi being the tenth lunar day of the Hindu calendar month the festival is celebrated on the tenth day of Navratri. The festival falls in the month of Ashwin according to the Hindu calendar. According to the English Calendar, Dussehra falls in the month of October.It is regarded as one of the most important festivals across the India, Nepal, Sri Lanka, and Bangladesh. The word Dusherra has been derived out of the Sanskrit vocabulary, where Dash means Devil and Hara means defeat. 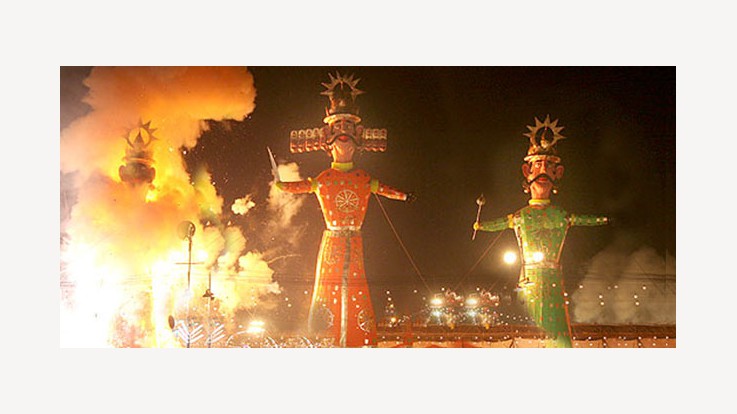 Burning of the effigy of Ravana

Legends behind the Festival:

Story of Ramayan:Ramayana the famous Indian epic mentions and states the importance of the festival. The festival has a different perception and significance attached to it. According to the Hindu epic, Ramayana, Lord Ram killed Ravan on the tenth day of Navratri, the day came to be known as Dusshera. Ravan was treated as an intelligent man, who was became a dictating ruler due to his ego. Ravana abducted Ram’s wife Sita and kept her in her in an isolated place. On the eve of Dusshera, Lord Rama killed Raavan with the help of an army of monkeys freed Sita from Ravana.

The end of Ravan meant the end of bad and evil spirit, as he was a demon by birth too. Dusshera is celebrated by burning the effigy of the Ravan, Kumbhkaran and Meghnath. Ramleela enacts the story of the epic, describing the victory of Ram over Ravan. The end of the festival is marked offering prayers to Lord Rama and Goddess Durga.

The festival of Dusshera is celebrated to commemorate the victory of Goddess Durga over the Demon Mahishashura. The festival has a legend attached to it. According to the legend, all the people on the earth and even the heaven (swarglok) were upset and scared by the dictatorship Mahishasura, who was a demon. He was blessed to be undefeatable. Not all the gods, including Brahma, Shiva and Vishnu could defeat it. All the gods decided to create a power, which would have the ability to destroy the demon and free the world from his torture. This gave rise to the avatar of Goddess Durga known as Shakti. With all her powers and special weapons given to her by different gods made it easy for her to defeat the Demon. Maa Shakti helped to restore the peace of the world. Her victory is celebrated as Vijayadashmi or Dusshera.

Another story attached to Dusshera. Kausta was a young son of Devdatta. He was a Brahmin, living together in the city of Paithan. Finishing his education under the guidance of Rishi Varatantu, he wanted to offer his guru Dakshina. Rishi Varatantu asked for 140 million gold coins. The student went ahead to request King Raghu for the coins as he was famous for his generosity. King Raghu requested Kuber, the God of Wealth to create a rain of gold coins near the Shani and apati trees. Presenting his Guru with 140 million gold coins, Kautsa gave away the rest of the coins to the poor and needy on Dussehra. Over the years, people loot the leaves of Shani and apati trees regarding them as the symbol of gold. People gift each other as a symbol of gold.

How is Celebrated in India?

Dusshera in Northern India:People in Northern India celebrate the festival by enacting the Ramayana. Ram Leela enacts the story of Ram, Lakshman, Sita, Hanuman and Ravan. On the Final day, a chariot carrying Ram, Lakshman and Sita pass through the crowds to burn an effigy of Ravana, Kumbhakarna and Meghnath using an arrow.