An Auspicious day marking the beginning of Diwali is Dhanatrayodashi. Dhanatrayodashi is synonymously known as Dhanteras in different parts of the country. Dhanteras is celebrated on the first of the five days of Diwali and falls two days the festival falls on the thirteen day in the month of Kartik. According to the Folklore, On Dhanteras Goddess Lakshmi came out of the ocean while churning the Milky Sea. On Dhanatrayodashi, Goddess Lakshmi and Lord Kuber are worshipped. Lakshmi Puja on Dhanteras or Dhantrayodashi should be done during Pradosh Kaal, which starts as soon as the sun sets and lasts for approximately 2 hours and 24 minutes. The best time to perform the Puja is during the Pradosh Kaal when Sthir Lagna is there. Sthir Lagana means a fixed time. It is believed if Goddess Lakshmi is worshipped at this time. She will stay in the house for long.  In some parts of India, farmers and people worship cattle. Mostly it is the cow. As a cow is believed to be sacred to Hindus and believed to be the embodiment of Goddess Lakshmi.

There are a number of rituals and customs are followed. Buying metals like gold, silver or steel made things, which are considered auspicious on Dhanteras. Most of the people prefer buying gold, silver, brass or at least two utensils made out of metal. It is believed that the metal also known as Dhan is a sign of good luck and prosperity on the day. In the evening, Lakshmi Pujan is done with the help of earthen lamps (Diyas) and Sweets to drive away evil spirits and bring prosperity to the house."Bhajans", devotional songs in praise of Goddess Lakshmi, are also sung. On the eve of Dhanteras, families decorate the entrance of the house with Rangoli and lamp for welcoming Goddess Lakshmi in the house and guiding her along. The offices are decorated with colorful flowers and Rangoli designs.  To await her arrival, small footprints are made out vermillion powder and rice flour. Businessmen worship their wealth and treasuries on the Dhanteras. As Dhanteras marks the beginning of the new account books. 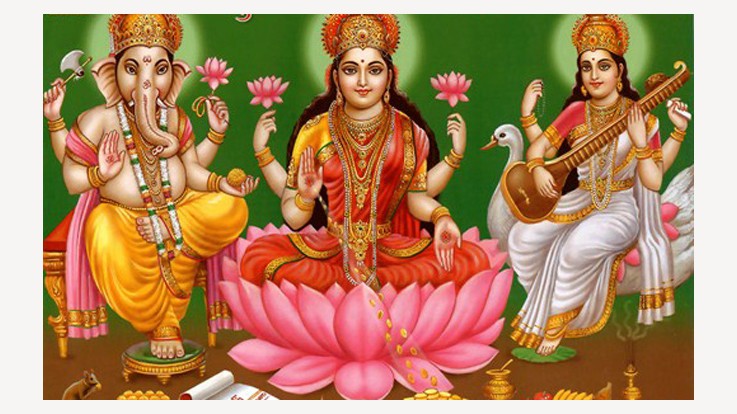 There have been many stories attached to the festival, but the most famous one is of Maha Vishnu and Lakshmi Devi. Lord Vishnu released Goddess Lakshmi from the captivity of Naraksura. He then performed Abhishekam with by pouring a mixture made out of cow's milk, sandalwood paste and seven holy waters. Lord Vishnu also did investiture by blessing Goddess Lakshmi with the power of wealth. So on the day of Dhantrayodashi, people invite goddess Lakshmi to bring in fortune, wealth, prosperity and the epithet of beauty.

Another legend attached to the Dhanatrayodashi states that in a cosmic clash for the Amrit or the divine nectar between the demons and the gods. Dhanvantri, who is an incarnation of Lord Vishnu and also the physician of the gods out of the ocean carrying a pot of the elixir. So, according to the Folklore, Dhanteras is derived out of the world Dhanavantri, the divine doctor. The day is dedicated to  inaugurate any new discovery in the medical field.

Another story behind Dhanteras states the story of King Himavantha’s. According to a story, it was believed that the King Himavantha’s 16 year old son would die on the fourth day after his marriage due to snake bite. On the fourth day of the marriage, the prince’s young wife laid all her coins and ornaments making a big heap at the entrance of the room, lightning lamps and singing. Yama disguised as a snake reached to take the young prince; his eyes got blinded by the dazed by the shine of ornaments and coins. He could not enter the room. He sat at the entrance of the listening to melodious songs, missing the deadline. He had to spare Prince’s life. As an intelligent plan, the prince’s wife was able to save her husbands life. Dhanatrayodashi is celebrated as a remembrance that any problems in fate can be rectified by doing the right karmas (actions). It motivates one to do good deeds to strengthen one’s fate. For this reason, this is considered an auspicious time to buy jewellery.

The next day came to be known as Naraka Chaturdashi.  'Naraka' mean hell and Chaturdashi mean 14th. Therefore, Naraka Chaturdashi is celebrated after Dhanteras by lighting earthen lamps throughout the night lionizing Yama, the god of Death.  The night before Diwali came to be known as Chotti Diwali or Small Diwali. Dhanatrayodashi aims to bring prosperity and wellbeing into the family. It gives you a chance to feel blessed and be grateful for what you have.