An ancient temple of Adi Badri is located in Chamoli district of Uttarakhand. The temple is a part of the sixteen tiny shrines nestled in the mountains, near the crossway of river Alaknanda and river Pindar, which is also known as 'Karnaprayag'. Adi Badri is believed to be the first temple which was constructed as a part of the Sapta Badri temples. Adi Badri temple was established between 5th to 8th century during the Gupta period by Adi Shankara. Also known as 'Helisera', the temple stands 98 ft tall and is spread over 46 sq ft of area. Adi Badri is a cluster of 16 temples with the main Narayan temple is devoted to Lord Vishnu.

The shrine of Adi Badri is situated about 3 km from Chandpur fort. The black stone idol of Lord Vishnu measures about a metre, which holds a discus or 'chakra', lotus and mace in his hands.

The main temple of Narayan is built on a raised platform in the pyramidal form where the idol is enshrined. Adi Shankara is believed to have built these temples to spread Hinduism in every remote part of the country. The sanctum has a black stone image of Lord Vishnu which stands 3’3 ft tall, holding a mace, lotus and a chakra . Brahmins from South India serve as chief priests in Adi Badri temple.

The Lake of Benital can be seen near the temple. The remnants of 16 temples are also present at this place which is said to have been created during the Gupta era. Adi Badri is one of the five Badris or Panch Badris which includes Bhavishya Badri, Vriddha Badri, Vishal Badri and Yog-Dhyan Badri.

The main temple of Narayan is built on a raised platform in the pyramidal form where the idol is enshrined. 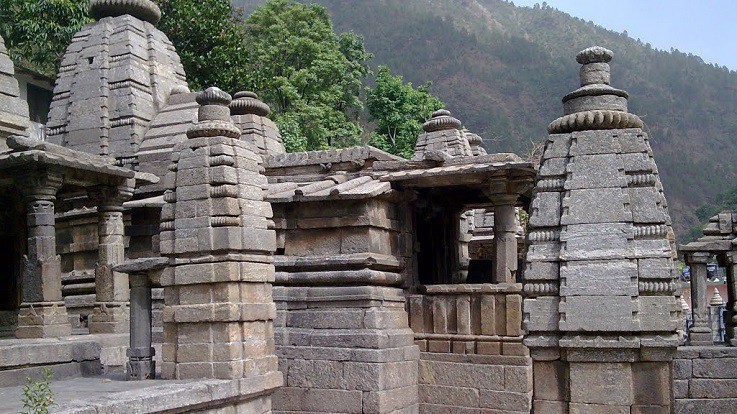 Aadi Badri is an ancient abode of Lord Vishnu who is known as ‘Badri’ in Badrikshetra. It is said that Lord Vishnu lived at Adi Badri during Sat yug, Treta yug and Dwapar yug. He moved to Badrinath in Kali Yuga. The prophecy says that Lord Vishnu will come to Bhavishya Badri after the end of Kali Yuga.

First among Sapta Badri, Adi Badri is visited by thousands of pilgrims every year. It is believed that Sage Veda Vyas wrote Shree Mad Bhagwat Geeta at Adi Badri.

Every year on the day of Akshaya Tritiya of Baisakh (April-May) devotees gathers at Adi Badri. On Kartik Purnima, Kapal Mochan fair is held in Adi Badri. The devotees take a holy dip in Kapal Mochan kund, worship the Lord and celebrate the fair.

By Air: The nearest airport is Jolly Grant which is located at Dehradun.

By Rail: The nearest railhead is Rishikesh.

By Road: Adi Badri is well connected by roads with Dehradun, Nainital and other major cities of Uttarakhand.