Akshardham temple located at Gandhinagar, Gujarat is one of the largest temples of Gujarat. The temple was built over 13 years and is a tribute to Lord Swaminarayan, his life, and teachings. The temple is a carved stone structure, which is surrounded by beautiful gardens. The massive structure stands 108 ft tall, 240 ft in length and 131 ft in width. Steel or iron has not been used in the construction of the temple to protect the monument from rusting. Akshardham is built from 6,000 metric tons of pink sandstone which were imported from Rajasthan. The garden surrounding the sanctum is known as Sahajanand Van. A marble sculpture of Lord Swaminarayan is seen inside the garden. Sahajanand Van houses various cultural spots, games, and rides for children, a herbal park, a lake and a waterfall. The temple complex also owns a research center which is known as the Akshardham Center for Applied Research in Social Harmony (AARSH). 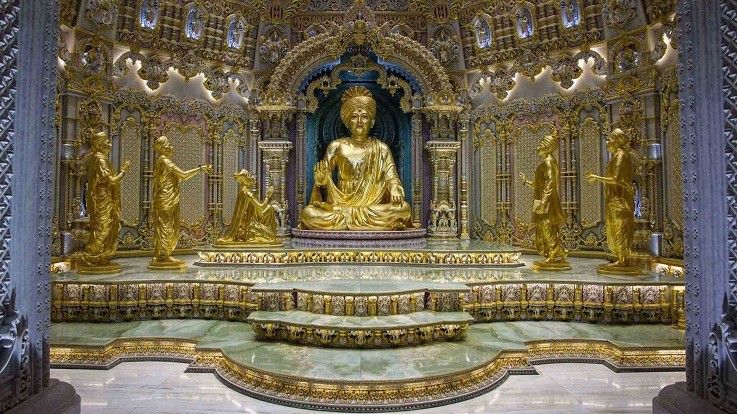 The first floor of the temple has a museum. Inside the temple complex, several other items are also kept in the display which includes the letters written to Swaminarayan's guru, Swaminarayan's shawl and an idol of the Lord on a horse. There are three exhibition halls inside the complex which educates the visitors about spiritual matters and BAPS movement. At Sahajanand exhibition hall, visitors can have a look at the illustration of the life of Lord Swaminarayan. The exhibition showcases a video show, a fiber-optics cosmos along with 'sound-and-light' shows. The Sat-Chit-Anand exhibition hall has a 14-screen multimedia presentation about Vedic philosophy and man's search for the eternal truth, "Tunnel of Mirrors", a glass mosaic, and musical fountains. The Nityanand exhibition has walk-through dioramas and fiber glass figures displaying the message from the Upanishads, Ramayana and Mahabharata. 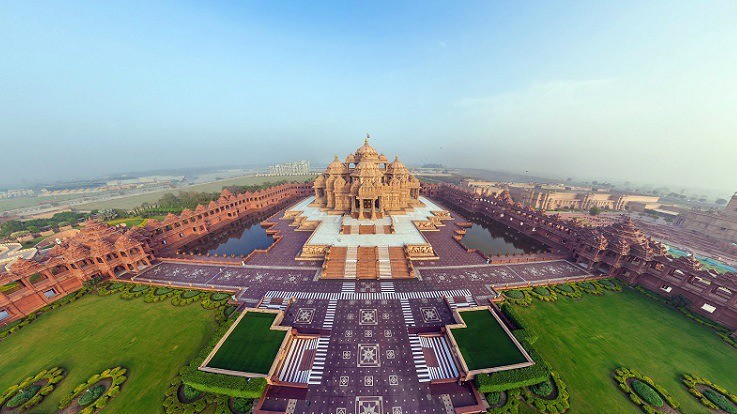 Akshardham was constructed under the guidance of Bochasanwasi Akshar-Purushottam Swaminarayan Sanstha (BAPS) which is headed by Pramukh Swami Maharaj. The temple was inaugurated in November 1992 by Pramukh Maharaj. Today, Akshardham Temple has become a major and popular attraction among the devotees and tourists. Akshardham is an excellent example of Indian roots, ageless art, borderless culture and changeless values. The sanctum sanctorum houses 7 ft tall, gold leafed image of Lord Swaminarayan. Different floors have been allotted different names such as Hari Mandapam, Prasadi Mandapam, and Vibhuti Mandapam. The main aim behind constructing this massive temple is to introduce people to the philosophy of Lord Swaminarayan and to educate people about the rich spiritual and cultural roots of India. 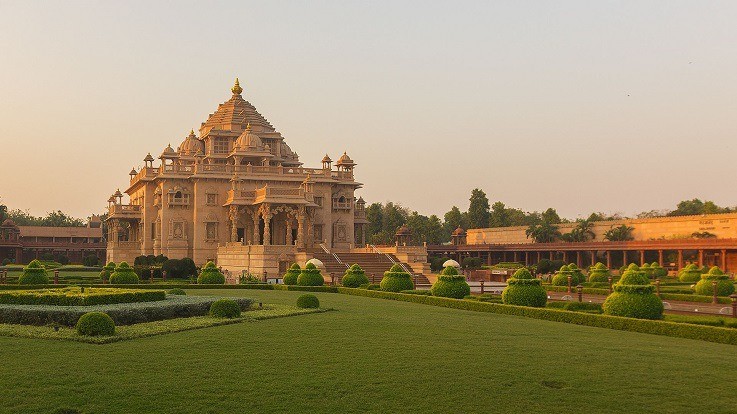 The festival of Diwali is celebrated with great joy. The temple is illuminated with lights. Annakut Utsav is celebrated after Diwali. Annakut involves offering around 2550 food items to the deity. This food is later distributed among the devotees. 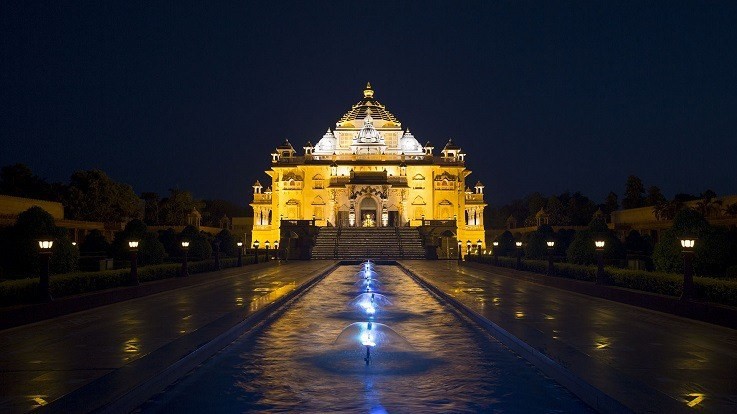 By Air: The nearest airport to Akshardham is Sardar Vallabhbhai Patel airport (18 km) which is located at Ahmedabad.

By Train: The nearest railway heads are Gandhinagar and Ahmedabad.

By Road: Akshardham Temple is located 23 km away from Ahmedabad. The temple can be reached through NH 8C from Ahmedabad towards Gandhinagar.