Located at Khuldabad, near Aurangabad, Maharashtra Bhadra Maruti Temple is consecrated to Lord Hanuman. The temple stands merely 4 km away from the famous Ellora caves. The temple houses an idol of Lord Hanuman which is in reclining posture. It is one of the three temples where Lord Hanuman is represented in a sleeping posture. The other temples are located at Jam Sawali, Madhya Pradesh and at Allahabad, Uttar Pradesh. Devotees throng Bhadra Maruti Temple during auspicious occasions. The statue of Lord Hanuman is placed in the center of the temple. The temple is represented according to the traditional style of architecture. The temple premise is made of marble and the ceiling is beautifully adorned with floral motifs. Hymns are written on the inner part of the temple walls. The idol of Lord Hanuman is adorned with an orange attire and a garland made of Banyan leaves. 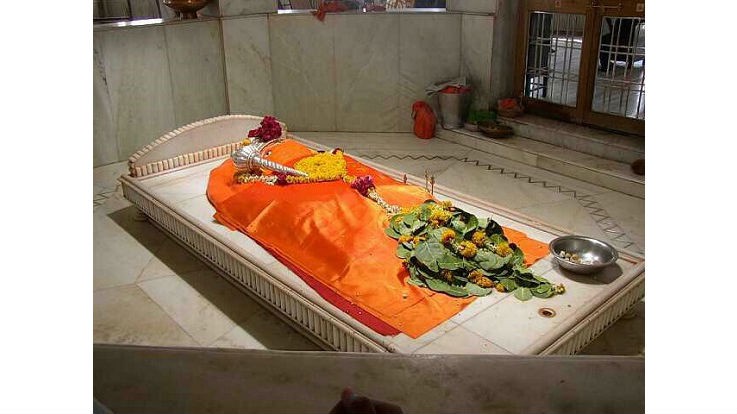 A legend states that during the Ramayana era, when Lord Hanuman was in search of Sanjeevani remedy for Lakshmana, this was the place where he rested. Hence, the idol in the temple is seen in a sleeping position.

As per another legend, Bhadra Maruti temple has been in existence since Trata yug. In ancient times, Khuldabad was known as Bhadravati which was ruled by King Bhadrasen. He was an ardent devotee of Lord Rama. He would often recite some bhajans praising Lord Ram. Once Lord Hanuman accidentally heard these devotional songs in praise of Lord Ram. He was so mesmerized that he went into 'Bhava-samadhi', a yogic posture. After reciting the bhajans, King Bhadrasen was astonished to find Hanuman in Bhav Samadhi. The king requested Lord Hanuman to make his place his abode forever and bless the devotees.

Later, this region was invaded by Mughal emperor Aurangzeb and it was renamed as Khuldabad. During the Mughal rule, the temple was totally destroyed. The idol of Bhadra Hanuma was recovered in 1966 by Shri Narayangiri Maharaj. The temple was reconstructed with the help of natives. Later, it was expanded and renovated by the Shri Bhadra Maruti Sansthan in 1991.

The festivals of Ram Navami and Hanuman Jayanti are celebrated with great devotion. On these occasions, the temple is decorated beautifully and special prayers and puja are conducted. Ardent devotees visit the temple on barefoot and seek the blessings of Lord Hanuman on every Saturday of Shravan month. The temple remains crowded on Saturdays and Tuesdays.

By Air: The nearest airport is located at Aurangabad which is 26 km away from Bhadra Maruti temple.

By Train: Aurangabad rail-head is 20 km away from Bhadra Maruti temple.

By Road: Khuldabad is well connected with all the major cities of Maharashtra by well-built roads. Private vehicles and buses are available to access the temple.