The temple of Bhimakali located at Sarahan town of Himachal Pradesh is dedicated to Goddess Bhimakali who was a chief deity of the rulers of Bushahr State. The temple is among one of the 51 Shakti Peeths. The temple architecture is unique with its wood carvings. The temple architecture is an amalgamation of Hinduism and Buddhism. The temple complex has another three shrines which are devoted to Lord Raghunath, Narsinghji and Patal Bhairav, the guardian deity. The legend says that the head of the defeated king Banasur was buried in front of the main gate which is now seen as a raised platform to the first courtyard. After the death of Banasur, Pradyuman, the son of Lord Krishna became the Ruler of this Kingdom. This ruling family got constructed a marvelous temple palace complex and established Goddess Bhimakali as the presiding deity of the ruling house. 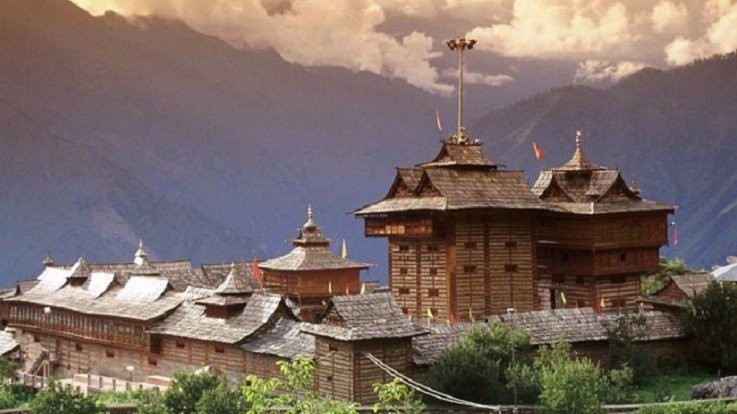 The temple has an interesting story. Long ago, there were many demons in the Himalayas who were a major distraction when the priests and sages used to perform havan. They all prayed and pleaded to Gods to send a divine force which can wipe the demons off. Responding to their plea, Gods decided to concentrate their powers. A huge explosion took place and a young girl appeared on that spot. This girl was the divine force who destroyed all the demons and was supposed to take repeated births to wipe off any evil force from the earth. The temple is consecrated to this great feminine power who was known as Bhimakali.

According to hearsay, the manifestation of the goddess had occurred when the ear of the Sati was dropped at this place. Later, it became a Shakti Peeth. An idol of the goddess at Bhimakali Temple represents the Virgin icon and it lies at the top level of the temple. The lower level of the temple houses an idol of Goddess as Parvati, the daughter of Himalaya who is a divine consort of Lord Shiva.

According to another legend, Goddess Bhimakali came from the wooden stick of a sage Bhimgiri. 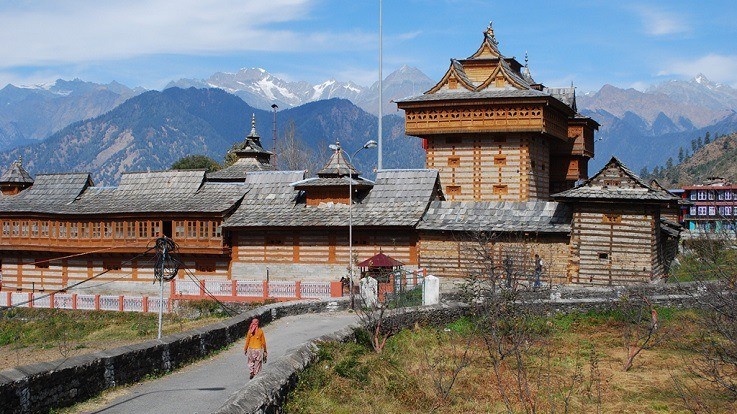 The festival of Udyapan Jag is associated with this temple and is celebrated after an interval of hundred years. The Navratras fair is organized twice in a year during Chaitra and Ashwin months. During Navratras hymn from "Durga Saptashati" is recited by the priest. During Ashvin Navratras, the festival of Dussehra is celebrated for three days. Janamashtmi and Budhi Dewali are also celebrated with religious fervor at the temple premises.

By Air: The nearest airport is located at Shimla (198km).

By Rail: The nearest railway station is at Shimla which is connected to Kalka (96 km).

By Road: The temple is 180 km from Shimla. Jeeps, buses, and taxies are available at Shimla and Rampur. Sarahan is six hours from Shimla by road.