The Bhimashankar temple is one among the twelve Jyotirlingas in India located 125km away from Pune in Sahyadri hills of Maharashtra. The temple located in Bhorgiri village, 50km northwest of Khed near Pune and is dedicated to Lord Shiva. Bhimashankar is the source of river Bhima, which flows southeast and merges into river Kaveri, Karnataka. It is also known in Pandharpur as ‘Chandrabhaga’

Long ago in the ancient times, an evil named Tripurasura with evil powers started harassing everyone in the three worlds. They all along with Lord Brahma requested Lord Shiva to come to their rescue. Lord Shiva agreed and appeared before the evil with all his magnificence. He killed the evil tyrant and released his devotees free. And the sweat that poured from his huge body in thousands of stream formed the river Bhima. Lord Shiva upon the request from his devotees made this place his abode and stayed as Jyotirlinga forever. Bhimashankar is a pilgrimage place where Lord Shiva’s spiritual magnificence merges into the nature’s beauty.

The Bhimashankar temple is built in Nagara Style of architecture that dates back to 18th century. It is a composite structure of both old and new style and is referred to in literature of 13th century. The shikara of the temple was built by Nana Phadnavis. It is said that the King Shivaji has also made endowments to the temple to carry out the worship services. The lingam in this temple is located exactly at the center of the floor of the Sanctum. The magnificent carvings of human figures and divinities show the scenes from mythology. The entrance of the temple is installed with Nandi, the Lord Shiva’s vahanam. There is also a small shrine of Lord Shani within the temple premises. An ancient huge Bell comes across the two pillars outside the Shani temple. A small path behind the temple leads to the banks of a river. 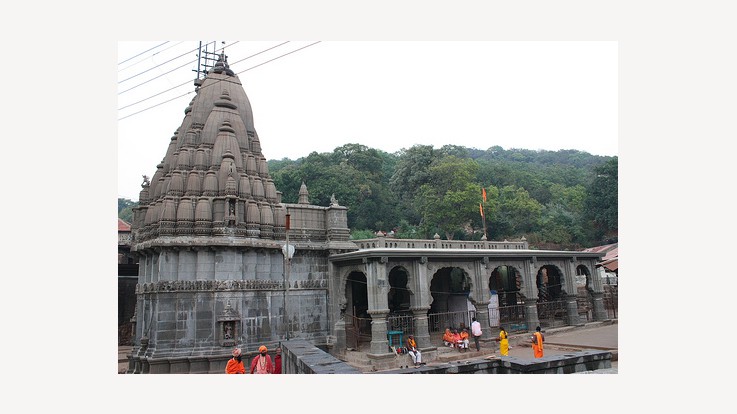 Significance of the temple

The worship of Lord Shiva is done with Rudrabhishek and Panchamrit snan every day. On Mondays as well as other days, lot of devotees flow in for Darshan. A big fest (mela) takes place on every Shivaratri festival.

The Shiva Purana and the Koti Rudra Samhita refer to Bhimashankar temple. There is also a reference that Shiva, Bhimashankara appeared in the Sahyadri hills.

How to reach Bhimashankar Temple

As the temple is located 160km from Pune, one can drive through Pune –Nasik highway and turn off the road leading to the temple. The mountain way is very steep. There are many bus facilities available to this temple.

The nearest airport and railway station is Pune indeed. Government buses shuttling from Pune are there for every half an hour from morning 5.30 to evening 4.00. And it takes around 3-4 hours from Pune.

The temple visit is good at any time of the year though the best visiting time is between August and February. It’s better to avoid visiting in summer and monsoon unless one likes trekking.

There is several lodging facility available with bungalows and tents. The local priests also make arrangements for lodging at a small cost. Places like Shinoli and Ghodegaon are good for staying near the temple. There are hutments and dharamshalas for accommodation near the village.

The temple marks for its peaceful atmosphere and enchanting presence inviting people all over the country.