About the Temple:Dakshineswar Kali temple is nestled in Dakshineswar near Kolkata city in West Bengal. The temple stands on the eastern bank of the river Hooghly. The temple is devoted to Goddess Bhavatarini, an incarnation of Goddess Kali who is known as the liberator of her devotees from the ocean of existence. Apart from the nine-spire main temple, the temple complex contains a large courtyard with rooms along with the boundary walls. Near the main temple are twelve shrines dedicated to Lord Shiva who is Goddess Kali's companion. Along the riverfront, a temple to Radha-Krishna is seen. A bathing ghat on the river and a shrine dedicated to Rani Rashmoni is also present near the temple. 'Nahavat-Khana' is the place where Ramakrishna Paramhans spent a considerable part of his life. 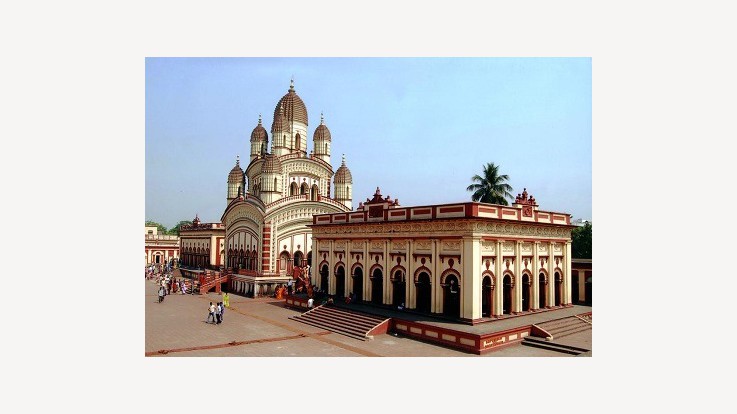 Temple History and Temple Architecture:The temple was constructed in 1855 by Rani Rashmoni, a philanthropist and a devotee of goddess Kali. Goddess appeared in the dreams of Rani Rashmoni and directed her to construct a marvellous temple on the banks of the Hooghly river and enshrine her idol in the temple. It is believed that Goddess has manifested herself in the idol at this place. It is one of the largest temples in Kolkata city. Queen Rashmoni lived for five years after the inauguration of the temple. 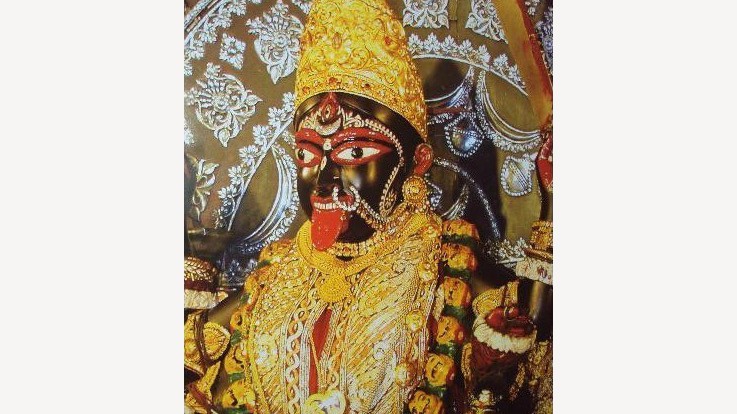 The Nava-Ratna style of architecture is incorporated in the construction of the temple. It is a three-levelled temple that faces towards the south. It has a high platform and the temple stands around100 ft tall. The temple is known for its association with Ramakrishna Paramhans. The main hall is constructed in the northwestern corner of the Lord Shiva temple which is known as ‘Nahavat-Khana’. This is the place where sage Ramakrishna Paramhans spent many years of his life. The Garbha Griha or sanctum sanctorum has an idol of Goddess Kali who is worshipped as Goddess Bhavataraini. She is standing on the chest of a prostrate Shiva. The idols are placed on a thousand-petal silver Lotus. Adjacent to the main Kali temple is a row of twelve identical Shiva shrines which are facing towards east and are built in a typical ‘Aat Chala’ Bengal architecture style. This temple stands on the either side of the ghat on the Hoogly river. Vishnu temple stands towards the northeast of the main temple complex.

Kali Puja is an annual festival held in the month of October and is one of the most important festivals. The Goddess is worshipped in a grand manner during the festival.

By Train: Kolkata railway station is 6 km away from Dakshineswar Kali temple.

By Road: Kolkata has good road connectivity. State-owned buses and private buses are available to reach this temple.