Ganapati temple is located at Tasgaon town of Sangli district in Maharashtra. Usually, Ganesh idols have a left-sided trunk, but at Tasgaon the idol's is seen with right sided trunk. Such Ganesh idol is considered as jagrut and it is regarded as a living idol, who bless the devotees with good luck, wisdom, prosperity and happiness. Ganesh idol is made of copper and it has been placed in such a way that the idol is visible from any part of Ganapati Peth. The idol is embellished with solid gold. The beautiful temple of Lord Ganesh stands on the banks of river Krishna at Sangli. Ganesh temple is flanked by Rameshwar temple, on the right and Vishnu temple on the left. 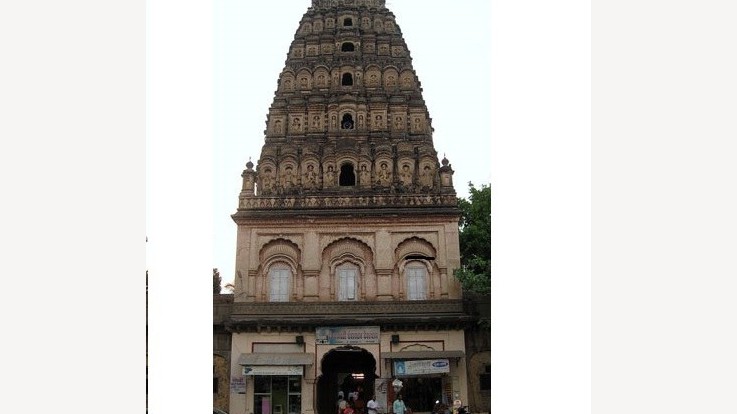 Parasuram Bhau Patwardhan, Sar-Senapati of Nanasaheb Peshwa was impressed by the South Indian temples. The construction of Ganapati temple started in 1779 by Parasuram Bhau Patwardhan and completed in 1799 by his son Appa Patwardhan. The artisans belonged to Hindu- wadar caste from Karnataka. The temple idol was consecrated in 1843 by Chintamanrao Patwardhan. The temple has been beautifully constructed from black stone brought from Jyotibha hills. The two acres of temple complex houses a platform, a hall and a 'Nagarkhana'. The entrance door has been carved from different colored natural wood.

The temple architecture resembles South Indian temple. It consists of a Mandapa which has a flat roof of carved stone slabs. The hall consists of a nave with three aisles made by two rows of pillars. At the hall's entrance, two shrines of the bull Nandi can be seen. The entrance gateway formed by a masonry arch surmounted by a tower known as the Gopura which is a large and lofty pinnacle. Gopura has carved images of gods and goddesses.

The Grand celebration is held on the next day of Ganesh Chaturthi when thousands of people gather to celebrate this auspicious occasion. Lord Ganesh stays for one and half-day. The Procession starts in the afternoon for immersion of Ganesh idol. An annual 'Rath Yatra' is held during Ganesh festival. It is also known as Ganapati Panchayatan which is a group of five deities. Guru Adi Shankaracharya introduced the idea of having five deities for worship. A wooden Chariot is decorated for this occasion which is pulled by the Ganpati devotees up to stream where immersion of Ganpati idol takes place. This tradition is followed since 1785.

By Air: The nearest airport is located at Kolhapur which is 53 km away from the temple.

By Train: The nearest railway junction is Miraj (25 km).

By Road: The state-run buses as well as private vehicles are available from various towns of Maharashtra to reach the temple.