About the TempleThe ancient temple of Gop is nestled in the small village of Zinavari which is located at Jamjodhpur taluka in Jamnagar district of Gujarat. It is believed to be one of the ancient surviving stone temples in the state of Gujarat. The temple architecture has an influence of Gandhara architecture pattern and it also resembles the construction style of north and south Indian temples. The Gop temple is consecrated to Lord Shiva who is also known as Gopeshwar or Gopnath.

Temple History and Temple LegendThe temple history dates back to the last quarter of the 6th century to the first half of the 7th century. The Gop temple falls under the category of the protected monuments and it is looked after by Archaeological Survey of India. The Gop temple is considered as Monument of National Importance. As per the legend, Gop temple is associated with Lord Krishna and Gopi. At this place, Shri Vallabhacharya had delivered his discourses and hence the place is also worshipped as one of the 84 Mahaprabhuji Bethak. The temple housed two idols of deities in yellow stone. Locally, the images are believed to be that of Lord Ram and Lakshman. The idol of Lord Ram is wearing a high square Makuta or crown while Lakshman is wearing a low square coronet, ringlets and long earrings. He has a spear in his right hand. As per the several historians, the figures are identified as Lord Vishnu and Skandha. Some believe that the image was dedicated to Lord Surya, while many devotees connect this place with Shaivism. 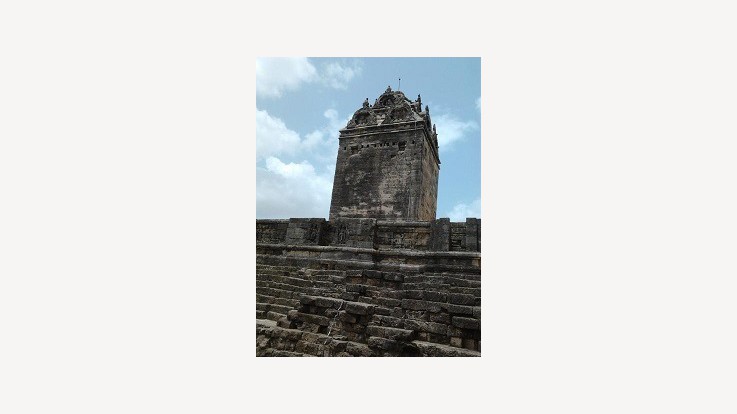 Temple ArchitectureThe Gop temple complex has a square shrine which is enclosed by two layered courtyards. The inner courtyard is almost damaged. These double courtyard may have served as parikrama or circumambulation path hence it is a Sandhara type of temple. The basement is decorated with niches in the centre as well as at the corners. These niches contain images of God. The stretch between these niches was ornamented with small statues. The shrine has a peculiar shikhara type roof. The shikhara or spire has around six to seven levels. It has bevelled edges which are followed by square faces. The vertex is covered by a stone with Amalaki or stone disc. The temple walls are simple without any ornamentation. The shrine door faces towards the east. The temple has chaitya-windows which house images of Gods. There is an image of Lord Ganesh placed on the west side and another figure of a God on the north side.

By Air: The nearest airport is Jamnagar 137 km

By Train: Dwarka railway station is the closest railhead.

By Road: The place has good road connectivity. State-owned buses and private buses are available to reach this temple.