Hangseshwari temple is nestled in Banshberia town of Hooghly district in West Bengal. Hangseshwari temple is dedicated to Goddess Kali. The temple also houses an idol of Lord Shiva. Here, Goddess Kali is worshiped as “Hangseshswari”. The idol of Lord Shiva is placed on six triangular marbles. From the navel of Lord Shiva, a lotus stem has set out on which, four-armed “Goddess Shakti” is standing with left leg resting on her right thigh The Blur colored idol of Goddess Shakti is made by using wood of Neem tree. The higher arms are carrying a weapon to represent her power to curb the demons, the lower left arm is carrying a cut head of a demon. 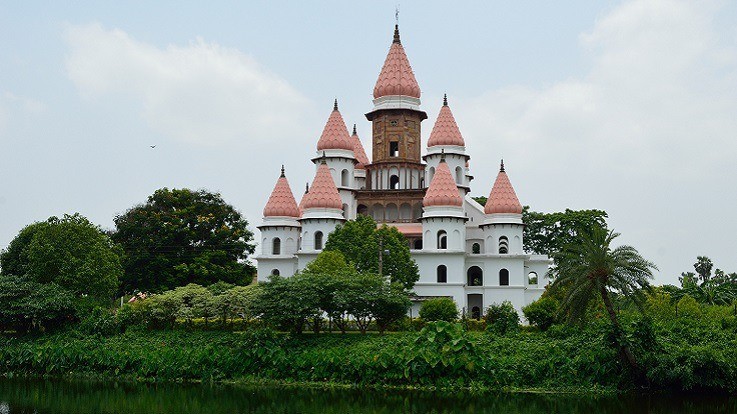 The Hangseshwari temple was built during the nineteenth century. This temple has an architecture that consists of Minars and Ratnas. The temple construction was started in 1788 by King Nrisinhadeb Roy Mahasay which was completed by his widow Sankari in 1814. The internal structure of this temple resembles human anatomy. The five storied Hangseshwari Temple is about 21 m tall and it has around 13 towers which look like Lotus. It is believed that this temple was made for Tantric as the structural design of the temple represents "Tantrik Satchakrabhed". 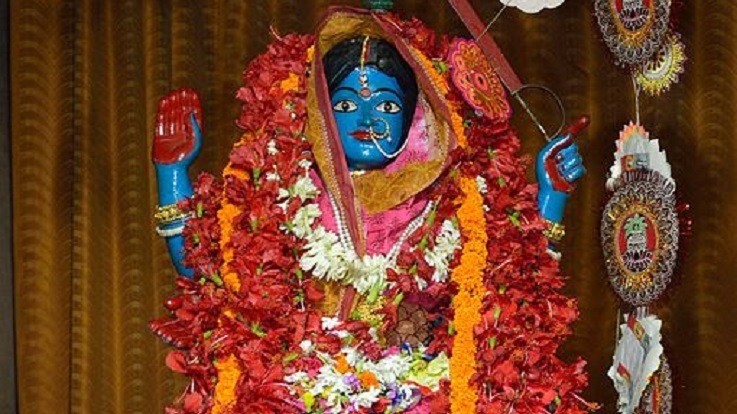 An interesting story is associated with the origin of the idol and temple. Rudru Pandit began a series of spiritual austerities. Due to his austerities, Lord Radhaballabh himself appeared in front of him in the disguise of a religious mendicant. He directed him to move towards Gaur, the capital of Bengal, and obtain a stab or stone which was adorned the doorway of the Viceroys private room. The Lord told him to construct an idol out of it. Rudru Pandit went to the city and found that the Viceroy was a devoted Hindu. Rudru Pandit announced the revelation which he had received from Lord. He was determined that no effort should be left to follow the orders of the Lord. Soon after, the stone started emitting water drops. It was asserted that the water drops were the tears of the stone. Permission was immediately granted to this effect, and Rudru Pandit was blessed with the gratification of his wishes. Rudru started working on the stone immediately and he created the idol out of it. The mysterious origin of the idol soon started attracting worshippers and the proprietors. Later, devotees decided to build a temple in order to protect the deity idol. 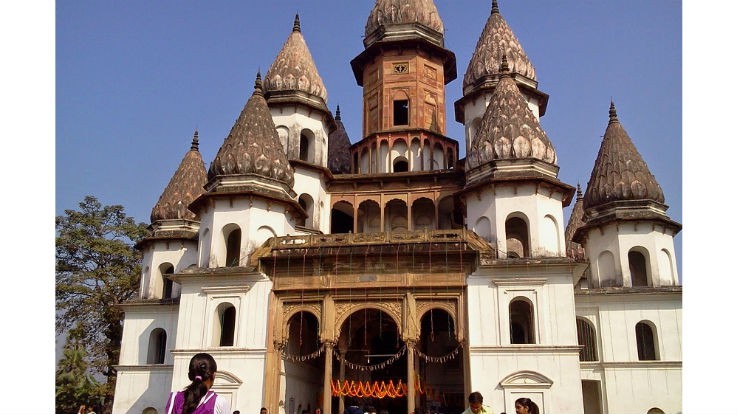 Kali Puja and Amavasya Puja are observed with great faith.

By Air: Netaji Subhash Chandra Bose Airport is 47 km away from the temple.

By Train: The nearest railway stations are Tribeni and Banshberia.

By Road: The temple is well-connected by road to all the major towns of West Bengal. Buses are available from Banshberia Bus stand.