Hanumangarhi temple is devoted to Lord Hanuman which stands on the bank of river Saryu in Ayodhya, Uttar Pradesh. Devotees can reach Hanuman temple after climbing 76 steps. This cave temple has an inner sanctum adorned with the 6-inch tall idol of infant Hanuman in his mother Anjani’s lap. It is believed that the idol grants boon to the devotees who worship in this temple. The temple resembles like a four-sided fort with circular bastions at each corner.

Devotees and visitors believe that Lord Hanuman resided at this site in a cave and looked after the Ramkot or the Janambhoomi. The main entrance of the temple has around 18 feet tall, self -manifested sidhuri idol of Lord Hanuman in a colossal form. This idol is also known as Dakshineshwar Hanuman since it is facing towards the south direction. 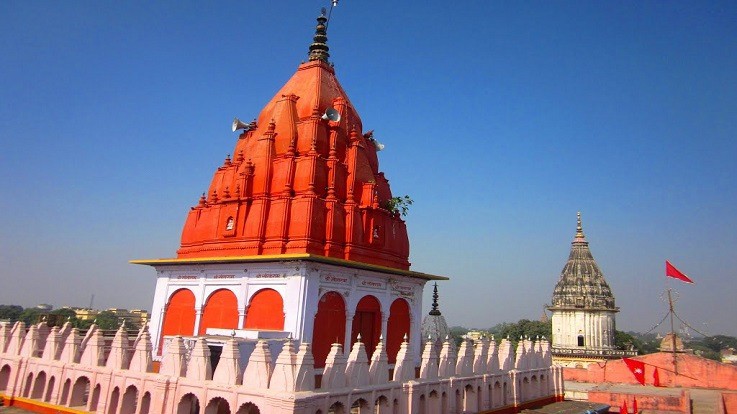 The Land of the temple is believed to have been donated by Nawab of Avadh. The temple construction was started during the middle of the 10th century by one of the courtesans of the Nawab. There is an interesting history behind the establishment of Hanumangarhi temple as the then Nawab of Awadh, Mansoor Ali ordered to renovate this temple. According to a hearsay, once Nawab Mansoor Ali’s son fell ill. No medicine was working on him. His son was on deathbed. Someone told Nawab to worship Lord Hanuman. And a miracle happened. Lord Hanuman granted his wish. He not only renovated this temple but also announced that henceforth no ruler can claim this temple and no tax will be collected from the temple. 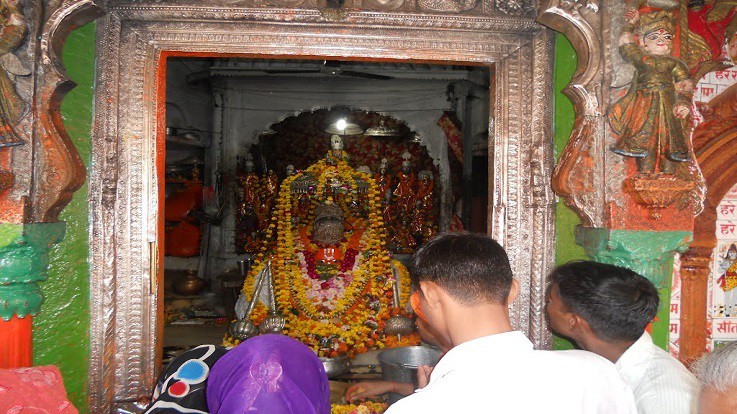 The temple was built at a strategic location between twin cities of Ayodhya and Faizabad where Lord Hanuman followers from the nearby cities could easily arrive to worship. The temple has gained immense popularity ever since it was established.

Lord Hanuman is considered as Kotwal of Ayodhya city. It is said that when Lord Hanuman saved the lives of Ram and Lakshman from Ahi-Ravan in Paatal Lok , they appeared first here in Naimisharanya on earth .

Another legend states that after returning from Lanka, Lord Ram asked Hanuman to stay at this place.

Hanumangarhi represents a culture which is an amalgamation of Hindu philosophy and an oriental architecture. The entire structure especially temple premises and other buildings having been developed with an artistic look.

Festivals of Ram Navami, Hanuman Jayanti, Dussehra and Deepawali are celebrated joyously in the temple.

By Road: Ayodhya has a well-connected road network. The temple is easily accessible by buses or taxis.

By Train: The nearest railway stations are Ayodhya (2 km) and Faizabad Junction which is 7 km away from the temple.