The east facing Jarai-Ka-Math temple is the most important monument located on the Jhansi-Mauranipur road in Uttar Pradesh. Jarai Ka Math was constructed during the reign of the Pratiharas. Jarai Ka Math was built by Mihir Bhoja, a Pratihara King in 860 A.D. This red sandstone temple is a Panchayatan type, where the main shrine is surrounded by four sub shrines at the four corners. The temple was declared as the heritage site by the Archaeological Survey of the India in 1928.

The temple is dedicated to the Goddess Amba whose multiple forms are represented as the carved sculptures on the temple walls. This Hindu temple is famous for its marvelous Pratihara architecture. The temple architecture is a characteristic feature of the Chandellas. 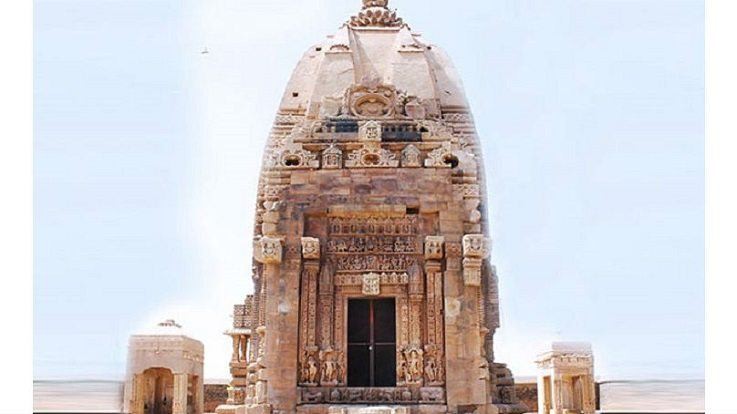 The temple stands on the elevated ground. The temple consists of a garbha-griha, antaral, Shikhar and a ruined mukha-mandapa. The garbha-griha of this temple is rectangular in the shape. The shikhara is damaged and only five levels have survived. The shikhara was presumably reconstructed and renovated during the 17th century CE. 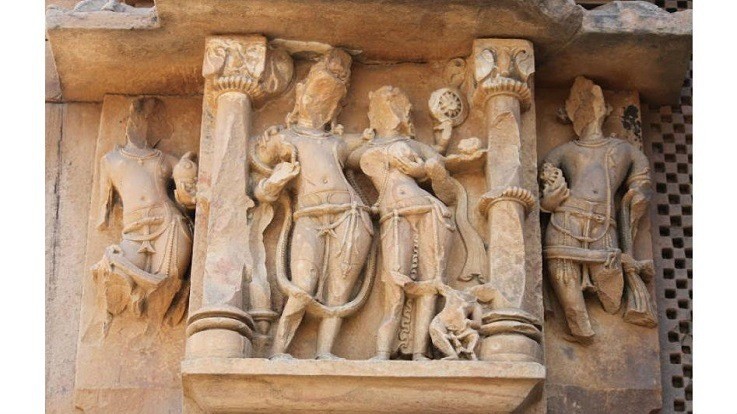 The sanctum doorway is heavily carved. The lintel has four rows which are adorned with various images. The uppermost row displays the images of five dancing female deities, including goddess Sarasvati holding a Veena. The next row has a portrait of Ashta-dikpalas riding on their respective mounts. The next row depicts Lord Brahma, Vishnu and Shiva with the images of two Bhikshatanamurti . The image of Bhikshatanamurti on the left of Lord Shiva depicts goddess Annapurna providing alms to Lord Shiva who is accompanied by Lord Bhairav and his dog. The last row has portraits of six goddesses, including Gaja-Lakshmi and Mahesvari.

The images of river goddesses, Yamuna can be seen on the left and Ganga on the right, at the bottom of the door frames. Beside these goddesses are found dwarpaals. There are four panels on each door frame, each displaying a scene from Bhikshatanamurti theme.

The rectangular sanctum, female dwarpaals inside antarala and images of goddesses over the temple vimana suggests that this temple was devoted to goddess or Shakti. It is believed that the temple was dedicated to Jara, who is an ancient Yakshi of Rajagriha and hence called Jarai Math.

By Road: Buses and taxis are available from all the major cities of Uttar Pradesh to access the temple in Jhansi.

By Train: The nearest railway station is Jhansi.

By Air: The nearest airport is located at Gwalior which is 98 km away from the temple.