About the Temple:Jatashankar is a natural cave which is located at a distance of 2 km from Pachmargi in Hoshangabad district of Madhya Pradesh. The cave is situated in a narrow valley and has huge boulders on the top. The term Jatashankar is comprised of two words, Jata and Shankar. Jata implies to hair and Shankar is a name of Lord Shiva.

The stone formations in the cave look like the hundred-headed divine snake Sheshnag. It is from the loose boulders of this cave that the Jambu Slipstream originates. The rocks of this sacred cave resemble the matted hair of Lord Shiva, hence this place is known as JataShankar. Inside the cave, there are naturally formed 108 Shiva lingam.

Temple History: Jatashankar cave represents the natural artwork which can be experienced by visiting the numerous stalagmites. There is a water stream which arises from the cave. No one has an idea about the source of the water. Hence, it is popularly known as ‘Gupt Ganga’. A naturally formed Shiva lingam under the shadow of a huge rock can be seen inside the cave.

There are two small ponds located near the cave. While one pond contains cold water, the other contains hot water. The idols of Lord Shiva and Goddess Parvati are installed on a platform in the upper section of the cave. Devotees worship these naturally formed Shiva lingams. 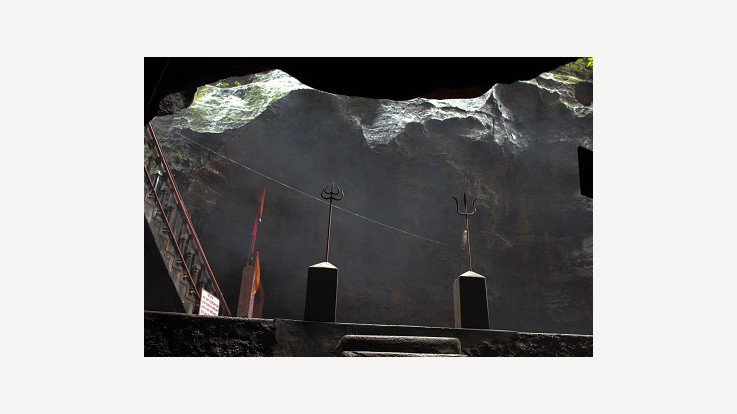 Temple Legend:Lord Shiva concealed himself from demon Bhasmasur in Jatashankar cave. One of the most popular legends about this temple is related to demon Bhasmasur, who was an ardent devotee of Lord Shiva. Demon Bhasmasur had a wish for special power which could turn anyone into ashes when he touches the victim’s head. Pleased with his austerity, Lord Shiva granted his wish. Bhasmasur took advantage of the power and misused it. He wanted to try this boon on Lord Shiva. Hence, Lord Shiva ran through a tunnel from Tilak Sindur. Later, he arrived at this remote cave, which is now known as Jatashankar. It is believed that while running through the cave, Lord Shiva lost his jata or hair. Hence, the place acquired the name Jatashankar.

The festival of Maha Shivratri is celebrated in this temple on a large scale. During this occasion, pilgrims from various parts of India visit the temple to offer puja and seek blessings of Lord Shiva.

An annual fair is also organised during the Maha Shivaratri festival in Pachmarhi.

By Road: Buses and taxis are available from all the major cities of Madhya Pradesh to access the temple.

By Train: The nearest railway station is Pipariya which is 31 km away from the temple.