About Kapal Mochan:Kapal Mochan is an ancient pilgrimage centre for Hindus as well as Sikhs. Kapal Mochan is located 17 km north-east of Jagadhari city, on the Bilaspur road in Ambala district of Haryana. It is also known as Gopal Mochan and Somsar Mochan. Its importance is evident from the fact that Kapal Mochan has been described in Mahabharata and various Puranas. Kapal Mochan has been mentioned in all the three mythological eras. It helps to relieve every sin. The devotees take a pious dip in Kapal Mochan Sarovar to get rid of their sins. There are four ‘tirthas’ in the four directions of Kapal Mochan. These are known as Sam Sarovar, Rin Mochan, Surya Kund and Chandra Kund. Pandavas along with their mother Kunti and wife Draupadi also visited this place after the battle of Mahabharata to get rid of their sins. As per the folk story, in ‘Treta Yug’ Lord Ram came here to wash away his sin after killing Ravana who was a Brahmin. It is said that Lord Ram and Lakshman washed their weapons at this pond. Kapal Mochan is a natural cavern near the bank of river Saraswati. Sikh Guru Gobind Singh visited this sacred place in 1687 on his way to Paonta Sahib. Guru Nanak Dev also came here in 1584 and recited ‘Rattanmala’. The state government has constructed a martial art museum which is named after Guru Gobind Singh. 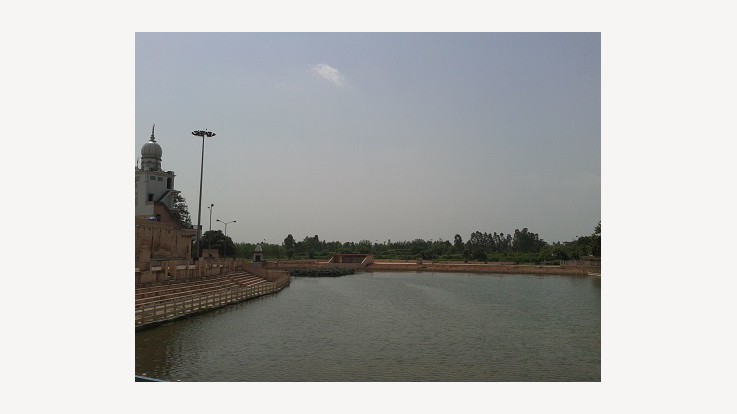 Kapal Mochan History and Legend:Kapal Mochan is an ancient and revered site. As per the Matsya Puran, the place was used as ‘Yagya Sthal’. A huge Yagya or havan was performed here in the beginning of Kalyug by the holy and prominent sages. During the ritual of ‘Puran Ahuti’, some differences cropped up between Devatas and Lord Shiva. Hence, Lord Shiva went to Adi-Badri. The term Kapal Mochan implies to wash away the sins of ‘Brahma Hatya’. Earlier it was known as ‘Somsar’. The ancient idols of Goddess Uma Mahadev and Lord Ganesh which dates back to the 11th and 12th century and the remains of Gupta period prove the antecedence of Kapal Mochan. As per the Legend, Brāhmanahatya or killing of Brahmin is considered as a major sin. Taking a holy dip at Kapal Mochan helps to get rid of Brāhmanahatya sin. On the either sides of Kapal Mochan pond, a black statue of cow and calf, as well as a white statue of cow and calf, can be seen.

Festivals and Celebrations:The annual, "Kapal Mochan fair" is held on the last three days of Kartik Purnima. On this occasion, the devotees take the holy dip here for Salvation. It is believed that many Hindu deities and Guru of Sikhs had stayed here from time to time.

By Train: Jagadhari is well connected with two Junctions namely Ambala and Saharanpur. From here, taxi and auto rickshaw services are available to reach Kapal Mochan.

By Road: Kapal Mochan Temple is well-connected by roads with all the major towns of Haryana.

By Air: The nearby airports are located at Dehradun and Chandigarh.