The main deity worshipped at Mansa Devi Temple, Goddess Durga, a form of Shakti, is the one who destroys the evil, protects the good and she being the Mother of love, power, wealth, beauty and strength. There are innumerable temples of Ma Durga all over the country and Mansa Devi Temple at Lambore Dham (popularly known as BadiLambore) village in Churu district, Rajasthan is one among them. The temple gives a view of the adjoining desert patches making a perfect place to worship and find your own self.

The legend says that, by the influence and guidance of Mata Mansa Devi, the temple was first constructed at Lambore Dham by the Hamirwasiya’s family. Later, Shri Jagannath Prasad and his younger brother Shri BuddhiLal, improved the temple with the support of other devotees. In the year 1974, the foundation was laid by Shri Atmaram under instruction of Pundit GiridhariLalShastri and the idol of Mata Durga was finally placed the following year, 1975.

The temple has achieved much improvement from then and now composes 41 rooms, Shri Lamboria Mahadevji temple, Shri Lamboria Balaji temple, a Yagnashala and a Singhdwar. There are two large verandahs that could accommodate about thousands of devotees. Shri Mansa Mata MandirSeva Trust found in 1986, functions the temple’s management with latest facilities. The trust manages all the religious ceremonies of the temple under the leadership of Shri Laxminarainji Tambakheriwala. 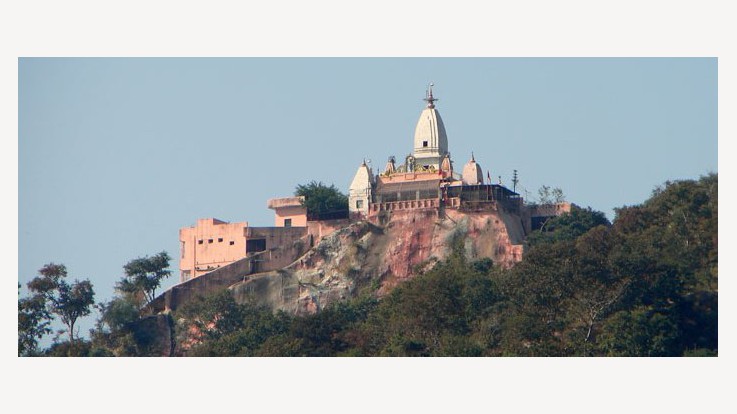 Owing to the mythology, the evil demon Mahishasur was killed by Goddess Durga who emerged as a power of lightning from the Gods Brahma, Vishnu and Mahesh. Goddess Durga appeared as a beautiful woman with ten hands possessing special weapons to kill the evil demon. Also she represents a Divine Force and Energy against all the evils and wickedness.  (The weapons refer as the power of Goddess to control the universe and to follow her orders).

The Maha Navaratri Festival, in the month of Ashwin, is celebrated very grandly and on a large scale by the trust and thousands of devotees visit the temple yearly that lasts for 9 days. Devi Mata is worshipped as Ma Durga, Ma Lakshmi and Ma Saraswati in nine different forms during Navaratri. Also, devotees observe fasting as a general ritual during Navaratri and offer their prayers. Religious dances take place at this festival and on the tenth day of this festival ‘Vijayadashmi’ represents the Victory of one’s own mind over evil thoughts.

Durga Puja is very important and a general procedure is followed to worship Maa Durga. A variety of foods, clothes and decorative objects are offered to her. Devotees chant Durga Sahasranamam with full devotion and bhakti.

Throughout the year, one can easily visit the temple but it is preferable to avoid during the summer due to the immense temperature at deserted Rajasthan.

By Road:-Accessibility to Lambore Dham is quiet convenient from major cities like Delhi or Jaipur which is at a distance of about 240 to 250km by road.

By Rail :-Nearest Railway Station is Sadulpur at Rajgarh, about 8km south of Lambore Dham on Sadulpur-Malsisar-Jhunijhunu road.

By Air:-The nearest airport to Lambore Dham is Sanganer Airport.