The revered temple of Mata Bhimeshwari Devi is located in the Jhajjar district of Haryana. The Goddess is fondly known as Beri Mata. Thousands of devotees come and worship the goddess at the famous Bhimeshwari temple. After reaching the temple, the devotees offer coconut and Prasad to the goddess. They also light the ‘Jyot’ of desi ghee in the temple as a part of the ritual. During the occasion of Navratri fair, newly married couples visit the temple to tie the nuptial knot again in front of the goddess. The Mundan ceremony of young children is also performed here.

According to a popular story, Goddess has been named Bhimeshwari as the idol of the goddess was installed by Bhima. It is believed that before the beginning of Mahabharata battle, Lord Shri Krishna asked Bhima to bring his Kuldevi to the battle field of the Kurukshetra and take the blessing from her. Hence, Bhima approached the Hinglay Mountain and requested his Kuldevi to move to the battle field. The goddess readily agreed but laid down a condition. She said that she will go with him but if he kept the idol down on the way she would not proceed further. On the way, Bhima felt the urge to answer nature’s call. Hence, he kept the idol of the goddess under a Beri tree. Bhima also felt thirsty. Hence, he banged his mace on the ground to take out water. Later, when he tried to lift the idol of goddess suddenly he remembered the condition. Bhima took the blessings of the goddess and went to Kurukshetra. After the Mahabharat battle got over, when Gandhari passed from there she saw an idol of her kuldevi. Gandhari constructed a temple at the same site. The ruin of the temple established by Gandhari is not present now but the seat of the goddess is still present. Today, a marvelous temple is constructed at the same site.

In Beri, there are two temples. Initially, this place was a dense forest in which sage Durvasa was residing. Every morning, sage Dhurvasa would bring the idol of the goddess in the outer temple and at noon again he would place the idol in the inner temple. This process of moving the idol from inner temple to outer temple is still followed religiously. The aarti sung by sage Durvasa is still performed every day in the temple. 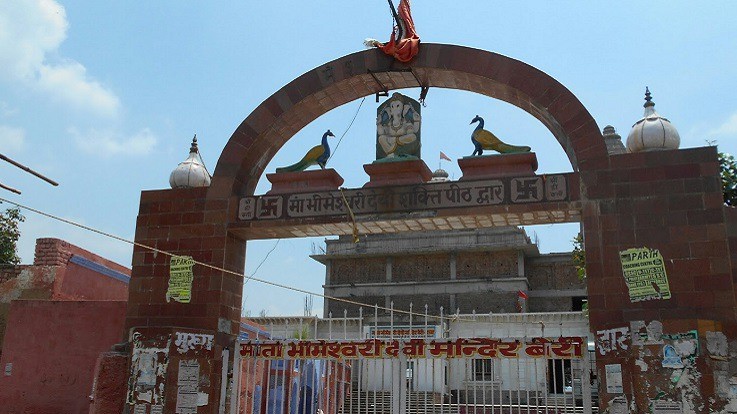 The famous fair of Beri wali Mata (Maa Bheemeshwari Devi) begins during the days of Navaratri. The festivals such as Holi, Chaitra Navratri, Ashvin Navratri, Dussehra, and Diwali are celebrated with great zeal.

By Air: The closest airport to the temple is New Delhi airport (62 km).

By Train: Rohtak and Jhajjar railway stations are the nearby railheads.

By Road: State buses and private vehicles are available from Rohtak Bus Stand at regular intervals to access the temple.