About the TempleMata Sarthal Devi Mandir is nestled in Sarthal village of Kishtwar district in Jammu and Kashmir. Sarthal Mata, a re-incarnation of Devi Durga, is the presiding Goddess of Hindus in Kishtwar and adjoining regions. Sarthal Devi is also known as Athara Bhuja Mata or Goddess with 18 arms among the devotees. Situated at approximately 6000 ft, this beautiful temple is covered with snow during winters. It is a cave temple which houses a single piece black idol of 18 armed goddess Sarthal which was brought from the Kashmir valley in the 14th century. 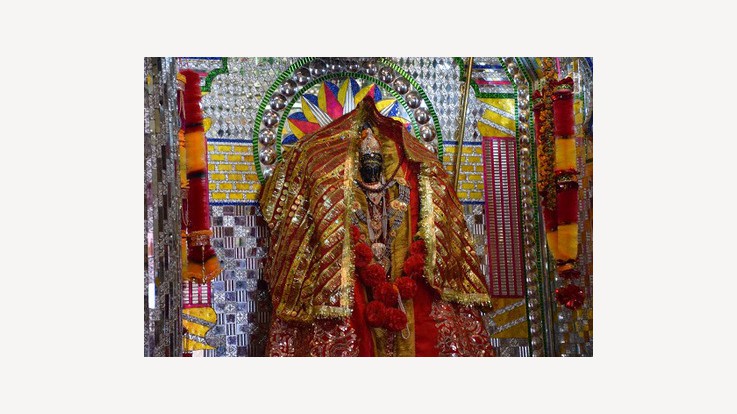 Temple History and Temple LegendThe original temple was built with the stones by locals with the help of Raja Agar Dev of Kishtwar. It is believed that a devotee of goddess residing at Agral village of Sarthal used to appease goddess. Goddess appeared in his dream and the devotee was told that he could find Goddess in the form an idol at a place called Kaligarh. On recovering the idol, this news also reached the King Agar Dev. He wanted to take the idol to Agar but the idol became too heavy to be lifted. A stone temple was got constructed by the locals. With the passage of time, a new temple was constructed about 5oo m away from original site and the idol was installed amidst Vedic rituals which was done by Raja Maha Singh on Bhadarpad Amavasya. The present temple was constructed in 1936 by Maharaja Hari Singh from the woods of Dayalwan and Deviyun forest. The temple is situated on the top of a hill and it has some difficult stairs to be climbed.

According to another legend, it is believed that 18 armed Goddess came from her abode at Hari Parbat in Kashmir Valley to take rest in the cave where the current temple is situated. Locals also say that Devi Sharika relocates to Kishtwar during the winter season.

Annual pilgrimage which is held in the month of July is an important event when people from adjacent villages visit the temple to seek blessings of the goddess. People offer tridents in the temple. The temple has a large collection of trident which are hundreds of years old. During the Dogra Rule, this annual event was known as "Sarkari Yatra". It is a three-day event which is celebrated in the entire district. It is considered auspicious to have first Mundan of a baby at this temple.

By Train: Banihal and Udhampur are nearest railway stations.

By Rod: State transport buses, private luxury coaches and private vehicles are available from all the major cities of Jammu and Kashmir to reach the temple in Kishtwar.

By Air: The closest airports to the temple are Jammu airport ad Srinagar airport.