Consecrated to Lord Ganesha, Moreshwar temple is located in Morgaon which is 80 km away from Pune city in Maharashtra. The temple is the starting and ending point of Ashtavinayaka pilgrimage which consists of eight revered Ganesha temples. The north facing temple stands in the center of Moregaon village & looks like a small fortress. The temple was constructed during Bahamani regime and it is built in Mogul style. The temple complex consists of a dome, surrounded by a 50 ft tall enclosure and four Pillars in each corner. A huge 'Nandi' idol made up of black stone, is sitting in front of the main gate, facing towards Moreshwar. The temple has four gates. Each gate depicts an image of Ganesha in the form that he appeared in the four ages. The quadrangular courtyard has two Lamp towers. A sculpted 6 ft mouse - the mount of Ganesha is seen in front of the temple. 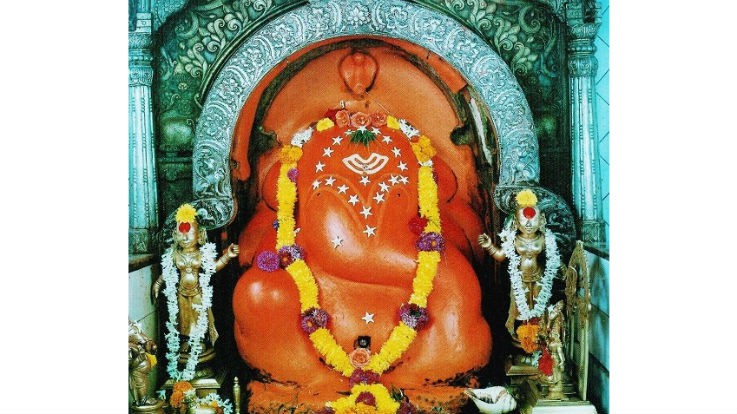 The orange colored idol of Lord Ganesha is seen in sitting posture. The east facing idol has three eyes with the trunk folded towards left. Eyes and naval are adorned with diamonds. Nagaraj, the Snake king is seen on the crown of the idol. Idol of Lord Ganesha is flanked by brass idols of Siddhi and Buddhi. A Rat and a peacock are seen in front of the idol. It is said that originally, a small idol of sand, iron, and diamonds was enshrined by Lord Brahma. Pandavas enclosed this idol in a copper sheet and placed behind the idol which is now worshiped. The idol of 'Nagnabhairava' seen on the left side of the main deity is worshipped first. 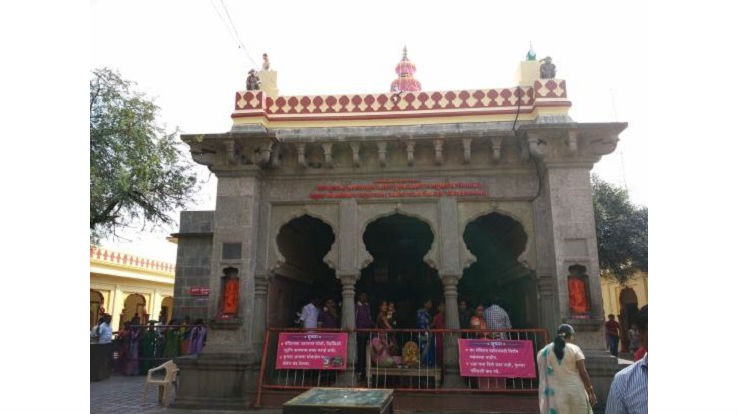 The temple was built in 14th century by Moraya Gosavi, a prominent Ganapatya saint. The Peshwas worshipped Ganesh as their family deity. The temple flourished due to the patronage of Peshwas and descendants of Morya Gosavi. As per Ganesha Purana, he was incarnated as Mayuresvara with six arms and white appearance. His mount is a peacock. He was born in the Treta Yuga to kill the demon, Sindhu. Parvati meditated at Lenyadri for 12 years which is also Ashtavinayak site. Pleased by her penance, Lord Ganesha promised her that he would be born as her son. Ganesha was born to Parvati at Lenyadri. Once, Bal Ganesha knocked an egg. A peacock emerged from it. Ganesha mounted the peacock and known as Mayuresvara.

Once, Sun god gave an ever-full bowl of nectar to demon Sindhu. He could drink from the bowl as long as it was intact. He swallowed the bowl. Sindhu created chaos. Gods pleaded Ganesha to help them. Ganesha defeated Sindhu and opened his body, emptied the nectar bowl and then killed the demon. At the end of this incarnation, Ganesha returned to his abode. He gave away his peacock mount to his brother Skanda. Because Ganesha rode a peacock, he is known as Mayureshwar or Moreshwar ("Lord of the peacock").

Another legend says that this place was full of peacocks giving the village its name, Morgaon ("Village of peacocks"), and presiding deity was known as Moreshwar. 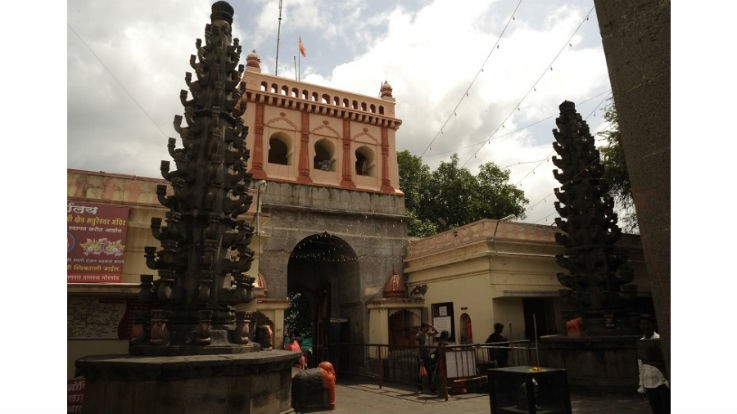 Festivals of Ganesh Jayanti and Ganesh Chaturthi are celebrated with great devotion. Devotees flock to the Mayureshwar temple on both the occasions. Ganesha Chaturthi celebrations last for more than a month. Fairs and celebrations are also held on Vijayadashami, Shukla Chaturthi, Krishna Chaturthi and Somavati Amavasya.

By Air: The nearest airport is Lohegaon airport, Pune which is 53 Km away from the temple.

By Road: State transport service buses, private vehicles, cabs, and taxis are available from Pune to Baramati. The distance between Pune and Baramati is 64 km.