Omkareshwar Temple, a Hindu temple of Lord Shiva in the Island of Mandhata or Shivapuri on the banks of Narmada River in the Khandwa district of Madhya Pradesh derives its name as the shape of the Island and the holy river resembles the symbol “ૐ”. Hindus worship Lord Shiva in the form of Lingam and the shrine where he manifested himself as Lingam of Light is known as Jyotirlinga. Mamleshwar Temple located on opposite side of Narmada river is closely linked with Omkareshwar temple as both are believed to be one form of Lord Shiva.

Both temples are considered as one among the twelve revered Jyotirlingas across India. The beauty of Nature is very attractive and peaceful with houses on terraced green trees, ghats and big mountains that echoes the sound of ‘Om Namah Shivaya’ 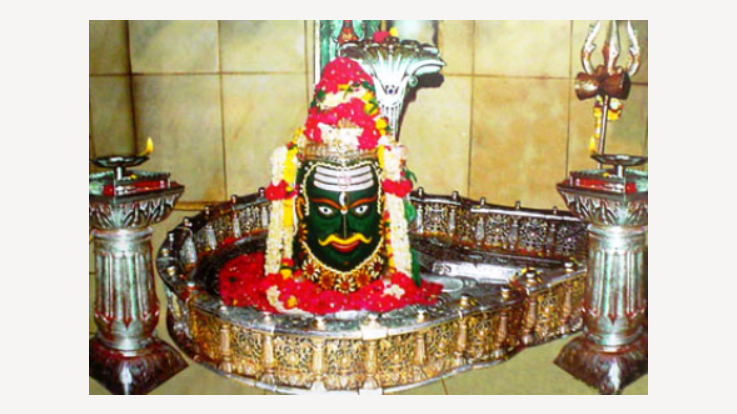 Long ago King Mandhata made this holy place as his capital and so it is also known as Omkar Mandhata. In 1195 AD, Bhils were defeated by King Bharat Singh who improved the temple’s glory. The temple was later renovated by Peshwa Baji Rao and Punyashlok Ahilya Devi Holkar. The temple architecture resembles the early medieval style. It is made up of soft stone with detailed stone carvings and extravagant wall paintings. A huge Nandi is carved on the hillside opposite to the temple of Gauri Somnath. The elephant carving over a height of 1.5m on a stone slab is indeed very attractive. A visit to the temple reflects the glorious times of 17th century and is a major religious place all over the world.

Omkareshwar temple has three important references in the Hindu mythology.

The first says that, the saint Narada on his journey visited Vindhya Parvat (mount) and praised the magnificence of Mount Meru. Vindhya became jealous and worshipped Lord Shiva to achieve more power than Meru. Lord Shiva pleased and blessed him with powers to grow but with a condition that Vindhya’s growth should not trouble his followers. But Vindhya forgetting this, started to grow that it even obstructed the sun and the moon. Saint Agasthya was then approached for help and he visited Vindhya . In order to greet Saint Agasthya Vindhya bow down then Saint Agasthya told to Vindhya to stay down until he comes back. After that Agasthya never returned since then Vindhya growth stopped and the Jyotirlinga placed here came to be known as Omkareshwar.

The second is about King Mandhata and his sons who worshipped Lord Shiva till he manifested himself as a Jyotirlinga.

The third is about the war between the Devas and the Demons. The Devas were defeated and hence prayed Lord Shiva. Shiva blessed them by emerging in the form of Omkareshwar and defeated the Demons. 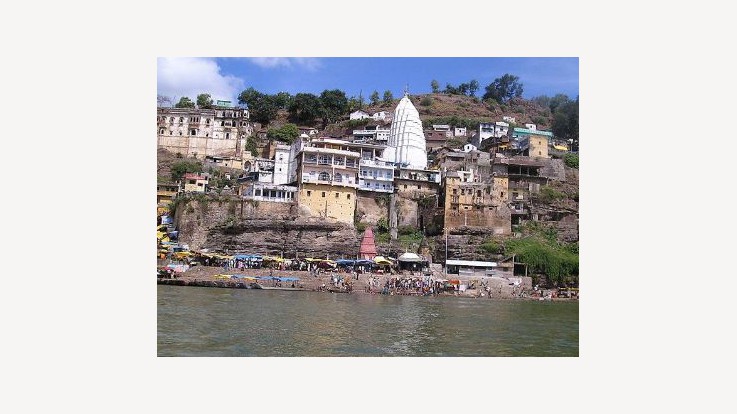 One can visit any time but best time is to plan around the two main Festivals celebrated here. First is Kartik Festival in the Kartika (Around November) month of Hindu calendar. Panchkroshi Yatra should be seen once in a lifetime and taking bath (snan) in Narmada on Somvati Amavasya is believed to be very auspicious.

The second is Maha Shivratri (around February) with special puja performed in the presence of thousands of devotees. Other festivals celebrated are Narmada Jayanti and Bhutni Amavasya.

Train: Station at Omkareshwar Road is the nearest but Indore Station is better connected by all major cities of India (Delhi and Mumbai).

Road: It is well connected to major cities like Indore, Khandwa and Ujjain with frequent bus  service.