About the Fort complex:

The Orchha Fort complex is nestled within an island formed by river Betwa and river Jamni at Orchha town in Tikamgarh district of Madya Pradesh. The Fort complex houses various ancient monuments including the palaces, temples and other edifices. The fort and other monuments were built during the 16th century by the Bundela Rajputs. The fort complex can be accessed from an arched causeway which reaches to a large gateway followed by a larger open space surrounded by various ancient monuments.

The fort was built in 1501 AD by King Rudra Pratap Singh of Bundela Rajput dynasty. The palaces and temples within the fort complex were built over a period of time by successive rulers of the Orchha State. 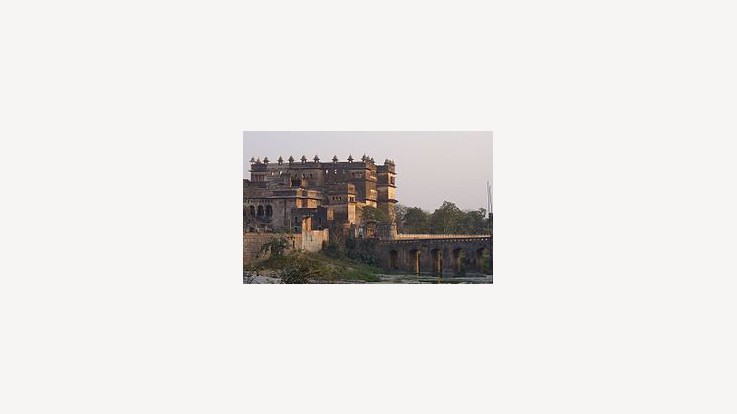 Raj Mahal: Built by Madhukar Shah in the 17th century, the palace has plain exteriors, crowned by chhatris, exquisite murals, boldly colourful on a variety of religious themes.

Jehangir Mahal: It was established in the 17th century by Raja Bir Singh Ju Deo to celebrate the visit of Emperor Jehangir to Orchha. The palace is adorned by delicate chhatris and trellis work which conveys an effect of royalness.

Rai Parveen Mahal: Rai Parveen was a poetess and musician. A paramour of Raja Indramani, Rani Parveen was sent to Emperor Akbar, who was mesmerised by her beauty. She impressed Akbar with her love for king Indramani that he sent her back to Orchha.

Sheesh Mahal: It is flanked by Raja Mahal and Jahangir Mahal. Sheesh Mahal was built for king Udait Singh which has now been converted into a hotel. The interior consists of a huge hall with high ceiling and a dining hall.

Sunder Mahal: It is a place of pilgrimage for Muslims. The small palace is in ruins. Dhurjban, son of Jhujhar, embraced Islam after he wed a Muslim girl. He spent the later part of his life in prayer and meditation and revered as a saint.

Ram Raja Temple: This temple is dedicated t Lord Ram. Originally, the idol of Lord Ram was meant to be installed in the Chaturbhuj temple. When the idol was kept at Ram Raja temple, it refused to move. Hence, a temple was constructed around it. The excellent courtyard, marble tiles and pink-yellow colour give a bright look to the temple.

Chaturbhuj Temple: It is built upon a huge stone base and can be reached by a steep flight of step. The temple was constructed to enshrine the idol of Lord Ram. The chastely plain sanctum delicate exterior ornamentation, Lotus emblems and domed walls are an example of brilliant artwork.

Laxminarayan Temple: The temple is consecrated to Lord Narayan and Goddes Laxmi. The temple interiors are adorned with Orchha's wall paintings. They are in excellent state of preservation, with the vibrant colours.

Phool Bagh: It is a formal garden, which was designed during Bundela dynasty. A row of fountains culminates in an eight pillared palace-pavilion.

Cenotaphs: The fort complex has 14 Memorials built in the memory of the rulers of Orchha. The cenotaphs stand along the Kanchan Ghat on the bank of river Betwa at the south end of town.

By Road: Orchha is well connected by roads with all the major cities and towns of Madhya Pradesh.

By Rail: Jhansi Junction is the nearby railway station which is 14 km away from Orchha Fort complex.

By Air: The nearest airport is located at Khajuraho (178 km).